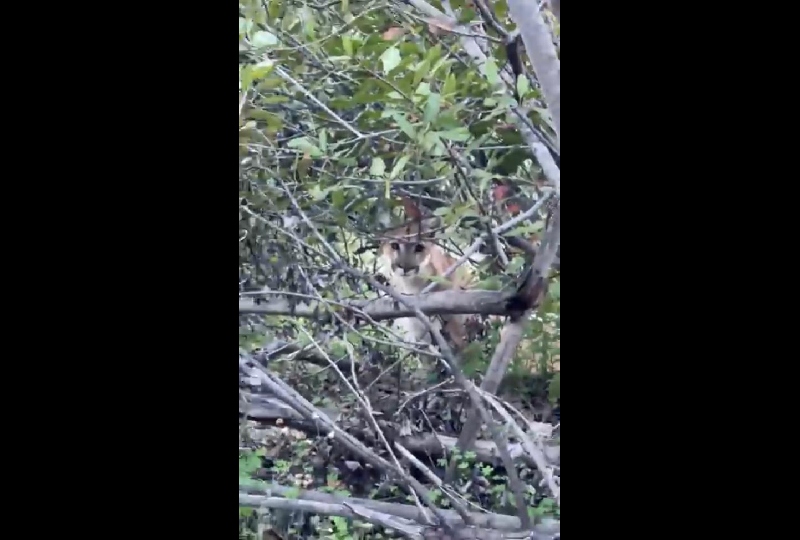 Wildlife photographer Mark Girardeau and his friend Rachel de Vlugt’s hiking trip in Orange County turned into a life-or-death situation when they came face-to-face with a mountain lion. The viral video shows the mountain lion stalking them in the bushes while Girardeau, standing just a few feet away, raised his voice to assert dominance.

Girardeau on his Instagram wrote that they had just checked few tracking cameras set out to capture wildlife when they saw the mountain lion run up a hill and stop to watch them 5-10 feet away.

Girardeau, an experienced photographer and wildlife enthusiast, said he knew it was best not to run as mountain lions see animals running away as prey. They stood their ground and made loud noises. In the video shared by him, he can be heard repeatedly shouting at the animal to go back.

“If I said I wasn’t scared, I’d be lying, but I had to kind of hype it up and make myself sound tougher,” said photographer Mark Girardeau to CBS Los Angeles. “This mountain lion didn’t blink. It was so weird and we were so close. You could just see its eyes staring at us.

Girardeau can be heard on video saying “Chill, just chill. Get back! Back away slowly. Hold on. Don’t go fast! Don’t turn your back either,” to his friend. De Vlugt took to Instagram and wrote “Thank God Mark was there because I think I would have taken off running (which is obviously the worst thing you can do)”

Girardeau on his Instagram explained “I think there are 2 things that could have caused this: either she has a kill nearby and she was defending it or she ran up at us not realising we were humans since she couldn’t completely see us from down below. There were deer in the area that we saw so she probably assumed it was them.”

The mountain lion has now been identified as a female known as Uno.