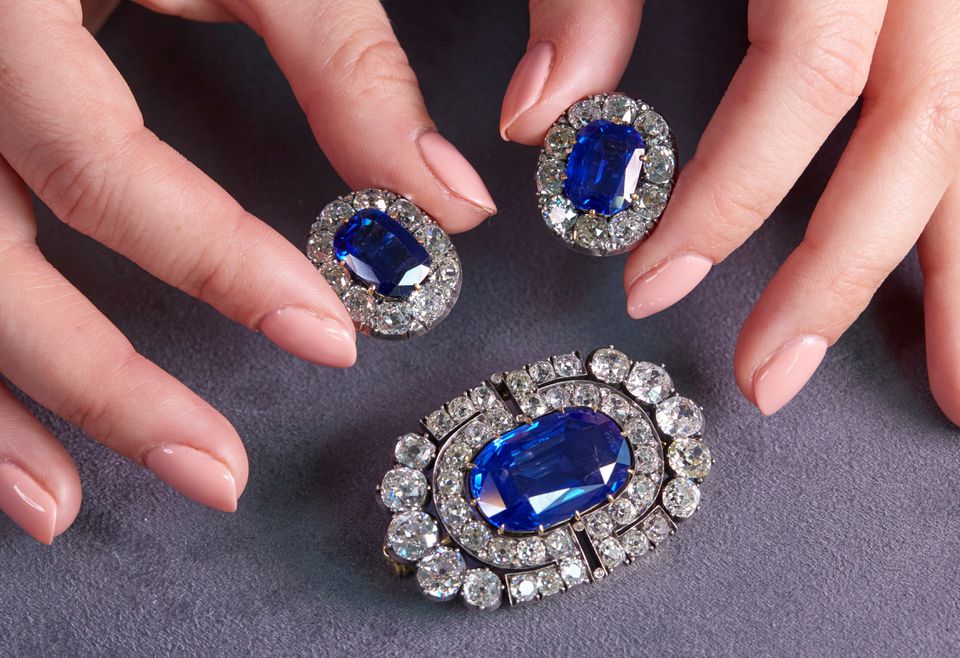 A staff member holds a historically valuable sapphire and diamond brooch and a pair of ear clips during a preview at Sotheby's, before their auction sale in Geneva, Switzerland, November 2, 2021. REUTERS/Denis Balibouse

A sapphire and diamond brooch and matching earrings, which were part of the royal jewels from Russia's Romanov family smuggled out of the country during the 1917 revolution, sold for 806,500 Swiss francs ($883,641.94) on Wednesday, Sotheby's said.

The price netted for the historic set at the Geneva auction was nearly twice the high-end of the pre-sale estimate, it said.

"Jewels with a more storied provenance rarely come to auction, and the appearance of these stunning sapphire and diamond pieces sparked interest from collectors worldwide," Sotheby's said in a statement.

The set was entrusted to Pavlovna's friend the British diplomat Albert Henry Stopford, who took them to London for safekeeping along with other jewels, the auction house said.

"Dressed in workman's clothes, Stopford was sent to secretly collect the jewels from the Grand Duchess's home, the as yet un-pillaged 360-room Vladimir Palace on the prestigious Neva embankment.

Let in through a side door by Maria Pavlovna's eldest son Boris and a trusted servant, he dismantled the jewels, folding the pieces into old newspaper to protect them," it said.

Stopford, after visiting Pavlovna in the Caucasus, set off for London in Sept. 1917 carrying 244 pieces of her jewels and deposited them in a bank there, it added.

Pavlovna fled Russia in 1919 and died the next year in Paris. The jewels were passed to her daughter, Princess Elena of Greece and Denmark, and kept in the family until they first appeared at auction in November 2009, when they were bought by "another European princely family" who sold them on Wednesday.