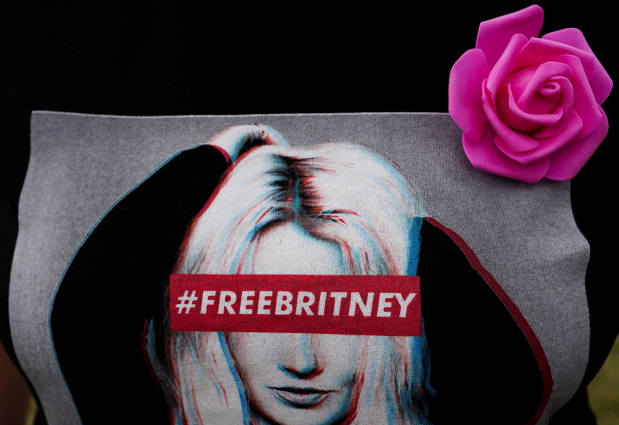 FILE IMAGE: A demonstrator wears a T-Shirt in support of Britney Spears during a "Free Britney" demonstration on the Ellipse, near the White House, in Washington, U.S. October 23, 2021. Reuters Photo

LOS ANGELES: Pop superstar Britney Spears wore a #FreeBritney T-shirt ahead of a key court hearing on Friday that she hopes will end a 13-year conservatorship she has called abusive and humiliating.

The "Piece of Me" singer, 39, has begged the court to terminate the legal arrangement that has governed her personal life and $60 million estate since 2008.

A smiling Spears and her fiance Sam Asghari donned #FreeBritney T-shirts with the slogan "It's a human rights movement" in a video posted on Asghari's Instagram account hours before the hearing in Los Angeles was due to start.

It was not clear if Spears will appear in person at the court or speak via audio as she has sometimes done in the past.

Dozens of her fans are expected to gather outside the courthouse and plan to hold a celebration if the judge delivers the milestone ruling they are hoping for.

The arrangement was set up and overseen by the singer's father after she had a public breakdown and underwent treatment for undisclosed mental health issues.

Since revealing years of private anguish in tearful testimony in June, Spears has received a groundswell of public support and hired a new lawyer who has moved aggressively to end the restrictions.

Los Angeles County Superior Court Judge Brenda Penny is scheduled to consider that request and possibly rule on the matter on Friday. None of those involved in the conservatorship opposes the request.

"This week is gonna be very interesting for me!" Spears wrote on Instagram earlier this week. "I haven't prayed for something more in my life!"

A key question is whether Penny might require Spears to undergo a mental health evaluation, a step often taken before ending a conservatorship. The singer has asked to be released without a new psychiatric assessment.

In June, Spears told the court she had been traumatized and wanted her "life back" as soon as possible. She said she had been forced to work and take medication against her will and was prevented from marrying or even getting her hair and nails done.

Her father, Jamie Spears, has said through attorneys that he helped his daughter rehabilitate her career and always acted in her best interest.

In an unexpected move in early September, he reversed his stance on the conservatorship and said he supported termination because the arrangement had helped her and was no longer needed.

Penny suspended Jamie Spears from the conservatorship in late September, calling his involvement "toxic" to the singer's well-being, and temporarily replaced him with an accountant.

Interest in the case was propelled in the past year by documentaries and a #FreeBritney movement of fans who questioned why the singer has lived under restrictions while successfully touring around the world and earning millions of dollars.