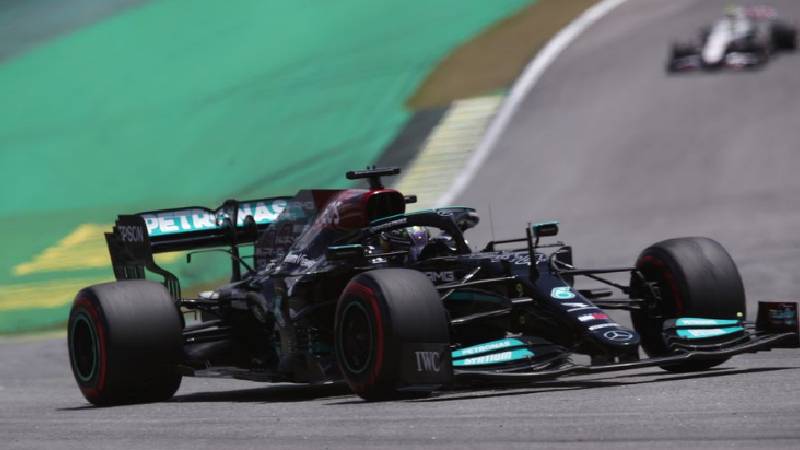 Formula One stewards sent Lewis Hamilton from first place to last ahead of a sprint race to decide the Sao Paulo Grand Prix starting grid on Saturday, with Red Bull's Max Verstappen poised to extend his championship lead.

Verstappen leads Mercedes' seven-time world champion by 19 points with four races remaining including Brazil and can stretch that advantage to 22 if he wins the 100km sprint at Interlagos.

Hamilton had been fastest in qualifying on Friday but his rear wing failed a technical inspection and stewards took away that result on Saturday. Mercedes said they would not be appealing.

He will start at the back of the grid for the sprint, having set satisfactory times in practice.

The Briton also faces a five-place drop in grid position in Sunday's race from wherever he finishes in the sprint, dealing another blow to his fading hopes of taking a record eighth championship this season.

Both title contenders arrived at the Interlagos track on Saturday with stewards' verdicts and the risk of penalties hanging over them, Verstappen for a breach of the international sporting code.

The Dutch 24-year-old had got on the wrong side of the rules for touching Hamilton's Mercedes with his hands after qualifying.

Video footage showed him getting out of the Red Bull, removing his gloves and putting his right hand into the slot gap of his car's rear wing. He then moved to the Mercedes and did the same, touching the rear wing in two places.

Hamilton's case hinged on a gap of 85 millimetres and looked a likely disqualification for non-compliance with the technical rules from the moment it was announced the car had failed the inspection.

"It's quite brutal but there are no grey areas, no fudge factors... You just can't let it grow by a millimetre here or a millimetre there," said Sky TV commentator and former racer Martin Brundle.

"I think it was the only conclusion the stewards could really come to," said Red Bull boss Christian Horner. "In that situation, it's black or white."

The stewards accepted that the design had passed previous tests and while there was no deliberate intention to gain an advantage by exceeding the maximum dimension there were also no mitigating circumstances.

Their report found that there was either a fault with the mechanism or incorrect assembly of parts.

"The stewards fundamentally accept the Competitor’s explanation that the cause of the failed test was something 'gone wrong' rather than a deliberate action," it added.

They pointed out also that article 1.3.3 of the International Sporting Code stated that it was "no defence to claim that no performance advantage was obtained".

The officials concluded that Verstappen's behaviour in parc ferme had no bearing on Hamilton's case.