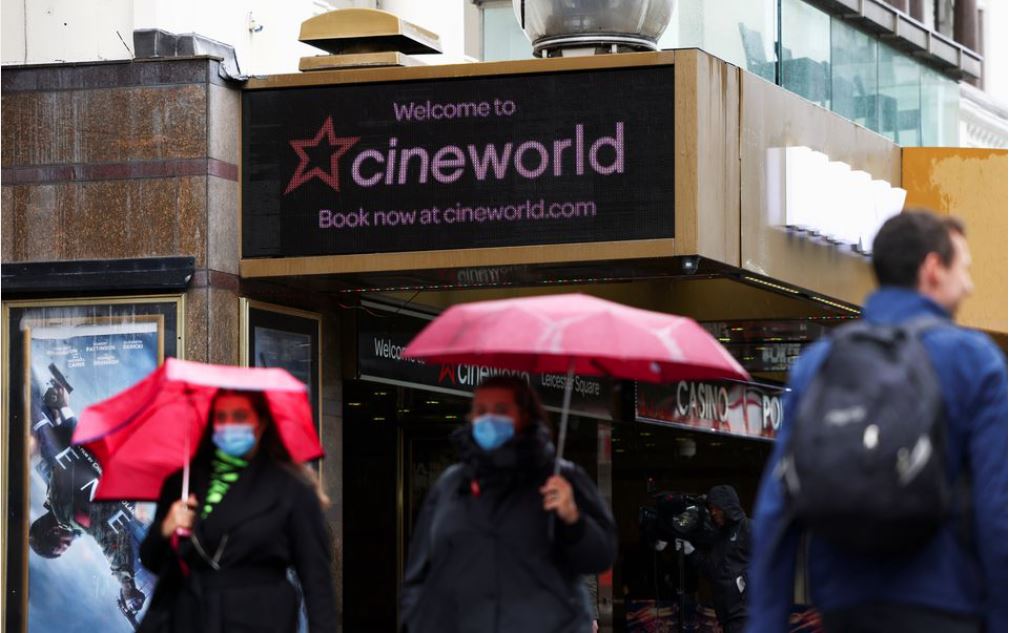 Cineworld sales touched 90% of pre-Covid levels in October, the world's second-largest theatre operator said on Monday, driving its shares up 14% while the London-listed firm also said demand in the UK and Ireland was greater than 2019.

It said revenue had grown steadily since reopening in April, driven by big-budget movies including Marvel's "Black Widow", "Shang-Chi and the Legend of the Ten Rings", Bond film "No Time to Die", and book-to-screen science-fiction "Dune".

Cineworld, which operates the Regal cinema chains, anticipates upcoming blockbusters, including the latest in "The Matrix" franchise - "The Matrix Resurrections" - to attract audiences and perform well if the pandemic does not deteriorate.

Cinema operators globally are relying on highly anticipated glitzy blockbusters to help them get back on their feet after being crushed by the pandemic and further poaching from streaming services as people got locked in their homes.

Many movie releases were moved to streaming services after the pandemic began, with giants Netflix and Disney and Amazon's Prime Video seeking to get ahead of long-lasting consumption shifts.

Straight-to-streaming has been a concern for cinema operators and even movie stars whose income is sometimes tied to box office performances in distribution and acting contracts.

"Our partnerships with the studios are as strong as ever and with the incredible movie slate to come, there are real grounds for optimism in our industry," Cineworld Chief Executive Mooky Greidinger said in a statement.

The company said its October revenue from the UK and Ireland jumped to 127% of 2019 levels, while the United States touched 80%.

Cineworld's larger rival AMC last week comfortably beat estimates for quarterly revenue. However, its boss warned that there were coronavirus-related challenges ahead.

Jefferies analysts said that Cineworld is well-placed to capitalise on people returning to cinemas, as its main markets seem keen to avoid further lockdowns. The company gets 90% of its revenue from vaccine-advanced nations U.S., UK and Israel.

Shares of the company, which gets the bulk of its revenue from its Regal cinemas in the United States, were up 5% by 0805 GMT on the FTSE midcap index.

As a result of the improvement in revenue and tighter control of costs, Cineworld said it generated positive cash flow in October and described it as an important milestone in its recovery.

Cineworld, which has been struggling with debt of about $8.44 billion, did not give any update on a potential U.S. listing it had mooted in August to bolster finances.