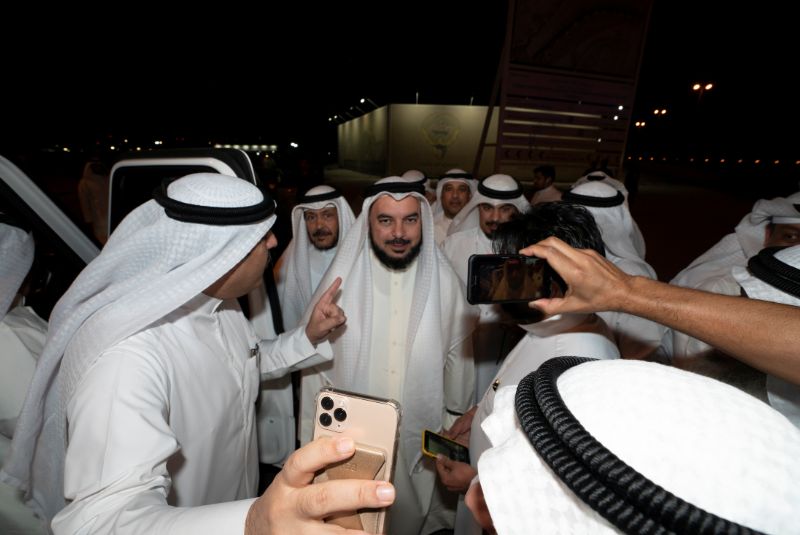 Jamaan Al Harbesh, one of the three Kuwaiti dissidents, smiles as he arrives after being pardoned by Kuwait's Amir Nawaf Al Ahmad Al Sabah, in Subhan, Kuwait November 15,2021.

KUWAIT: At least three Kuwaiti dissidents returned to the Gulf state on Monday after being pardoned by the ruling amir, part of his efforts to ease tensions with the opposition, which has been locked in a months-long standoff with the government.

Amir Shaikh Nawaf Al Ahmad Al Sabah has been working to meet conditions from the opposition to end a political impasse blocking fiscal reforms in Kuwait.

Shaikh Nawaf issued two decrees on Saturday granting pardons and reduced sentences to 35 dissidents, including 11 politicians who have lived in self-imposed exile in Turkey since fleeing prosecution in Kuwait over the last ten years.

Jamaan Al Harbesh, Mubarak Al Waalan and Salem Al Namlan, who were sentenced for taking part in a protest against government corruption and mismanagement that involved storming the parliament building in 2011, arrived at Kuwait's international airport late on Monday.

A crowd of supporters and local reporters gathered at the airport to receive the three politicians.

"We thank his Highness the amir for his generous initiative that would come only from a generous leader," Harbesh told the crowd. Waalan knelt and kissed the ground after leaving the airport, Reuters witnesses said.

Musallam Al Barrak, another pardoned leader of the opposition, is expected to arrive on Nov 17, Kuwaiti MPs said.

The political deadlock will focus on parliament potentially questioning Prime Minister Shaikh Sabah Al Khalid Al Sabah, a member of the royal family, on several issues including handling the Covid-19 pandemic and corruption until the end of 2022.

Shaikh Nawaf accepted on Sunday the resignation of Shaikh Sabah's government, in another step by the amir to end the feud with the opposition.