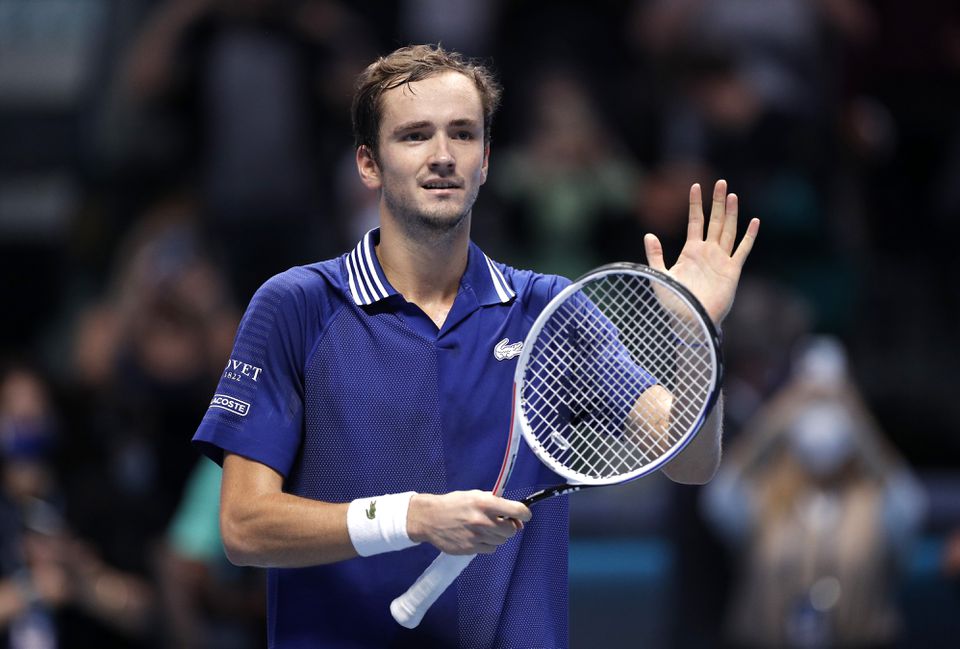 Medvedev extended his run of wins in the tournament to seven and is already guaranteed a semi-final place having beaten Polish debutant Hubert Hurkacz in his opening match.

Berrettini's place was taken by fellow Italian Jannick Sinner who gave the home fans plenty to cheer in the evening session with a 6-2 6-2 defeat of Poland's Hurkacz.

Russian world number two Medvedev, who won his first Grand Slam this year at the U.S. Open, raced into a 3-0 lead in the first set by frequently coming to the net and looked like he would take a comfortable fifth straight victory over Zverev.

However, the German found some confidence in Turin to bring himself back into the contest, firing down 13 aces and taking the second set on a tiebreak.

The pair could not be separated in the decider with neither able to break serve and both soaking up some heavy hitting.

In the decisive tiebreak, Zverev saved two match points but could only hit a backhand into the net on a third to give Medvedev victory after two hours and 35 minutes.

"Definitely one of the matches to remember," Medvedev said. "When you win 8-6 in the tiebreak in the third. Not actually much to say about the match, just amazing."

Zverev, 24, faces Poland's Hurkacz in his final round-robin match looking to clinch a place in the last four.

The 20-year-old Sinner can also still reach the semi-finals after his impressive demolition of Hurkacz.

"I knew around 5pm that I would play," Sinner said. "I was ready to go on court. It is an incredible feeling playing here in Italy with thousands of people cheering for you.

"I will enjoy the moment. I played well and felt good in the warm up. It was an incredible match today."

Berrettini announced that he was withdrawing from the event in a post on Instagram after suffering an abdominal injury.

"My finals end here, I'm destroyed, I never thought I'd have to give up the most important tennis event ever held in Italy in this way," he wrote.

"The truth is that as much as I wanted to play in front of you once again, I felt and therefore decided that my body is not ready to face the challenges that lie ahead."

"Matteo has been unlucky many, many times in his career and I wish him all the best," Sinner said. "I am going to play for him at this tournament because he deserves to be here."