Lazarov during his match against Haerteis

The line-up for the main draw of the ATP Tennis Challenger is complete with the top four players booking their berths from the qualifying round matches held yesterday at the Public Security’s officers club courts in Gudaibiya.

After some well-contested deciding matches in the qualifying round, Czech Republic’s Marek Gengel, Vladyslav Orlov of Ukraine, Alexandar Lazarov of Bulgaria and Maximilian Neuchrist of Austria secured berths in the competition’s main draw.

Gengel made it to the main draw after a come-from-behind victory over Khumoyun Sultanov of Uzbekistan in a well-contested encounter.

The Uzbek started the match well and took the first set 6-4, but Gengel rallied to superbly snatch the second and third sets 7-6 (2), 6-0 and with it a place in the main round of the tournament.

In another three-set match, Neuchrist halted a late comeback from Germany’s Tobias Simon to emerge victorious 6-3, 4-6, 6-3.

Lazarov completed the main draw line-up with a 6-3, 6-4 win over his German opponent Johannes Haerteis.

Meanwhile, action continues today, the third day of play, with 16 matches to kick off the round of 32, in addition to the inaugural round matches in the doubles event at the 10-day international tennis tournament, being organised for the second time in the kingdom.

The semi-finals of the singles and doubles events are scheduled for November 27, while the finals will take place the following day, the concluding day of the championship.

Organised by the Ministry of Interior’s Public Security Sports Association, the tournament is the largest tennis sporting event hosted by the kingdom, with world-class players from 27 countries in the fray.

It is being held under the patronage of Interior Minister Lt Gen Shaikh Rashid bin Abdulla Al Khalifa. The tournament is being supervised and observed by International Tennis Federation representative Valery Lutkov of Russia and run by international referee Ashraf Hamouda of Egypt. 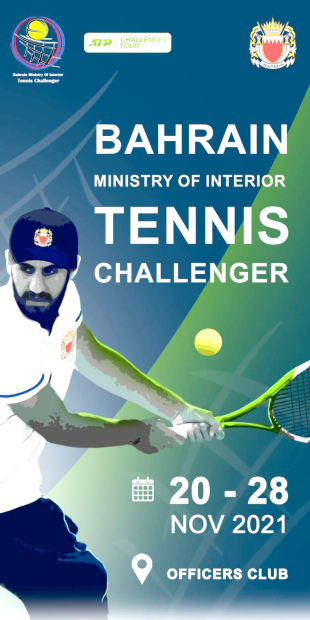