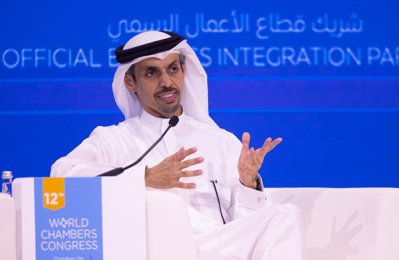 Hamad Buamim
Dubai Chamber has introduced Chamber Model Innovation (CMI) a new framework designed to fast-track Chamber-led innovation around the world.
The framework was presented to chamber leaders at the three-day 12th World Chambers Congress in Dubai, which kicked off today (November 23).
The framework provides a reliable reference for Chambers of Commerce to not only deal with disruption but also to become more agile and proactive in catering to member needs.
It was developed by a global taskforce, established by the World Chambers Federation and headed by Hamad Buamim, President and CEO of Dubai Chamber and Chairman of the International Chamber of Commerce’s World Chambers Federation. The CMI framework has already been successfully tested by several Chambers from around the world.
“Dubai is once again leading the world into the future,” asserted Buamim. “Dubai Chamber has launched the Chamber Model Innovation framework to empower and mobilise the global chambers community to adopt a smarter approach to providing better services that deliver added value to their members.”
“The CMI framework is the first of its kind anywhere in the world,” he continued. “It is a landmark accomplishment that cements Dubai’s role as a global leader in embracing disruptive breakthroughs and reinventing tactics to ensure agility in responding to any challenges.”
‘Task Force: Chamber 4.0’ – the taskforce developing the CMI framework – came back with a set of recommendations for the International Chamber of Commerce (ICC) and its World Chambers Federation (WCF), calling for them to familiarise themselves with the CMI as a framework and mindset to support and encourage Chambers and groups of Chambers to become more agile and adaptive.
The ICC and WCF must leverage the work done by ‘Task Force: Chamber 4.0’, as well as the experience of Chambers already using CMI, to generate guidance on good practices for the benefit of Chambers relatively new to the framework, in addition to promoting CMI by incorporating it into congress awards programmes starting with the Geneva Congress, and exploring the creation of CMI resources available to all Chambers of Commerce.
Dubai Chamber also launched the CMI Playbook to provide a roadmap for Chambers, complete with tools and case studies advising, to advise them on how to efficiently integrate the CMI framework within their organisations.
The World Chambers Congress brings together more than 1,000 participants from over 100 countries around the world. The event features more than 80 prominent speakers across 40 panel discussions and workshops, offering an ideal platform for participants to discuss challenges and opportunities facing international trade, and to outline the prospects for economic recovery post-pandemic. Delegates will debate the role of Chambers of Commerce in light of the digital revolution and global economic developments.
The Congress will also include the World Chambers Competition – the only award programme of its kind to recognise innovative projects undertaken by chambers from around the world.-- TradeArabia News Service