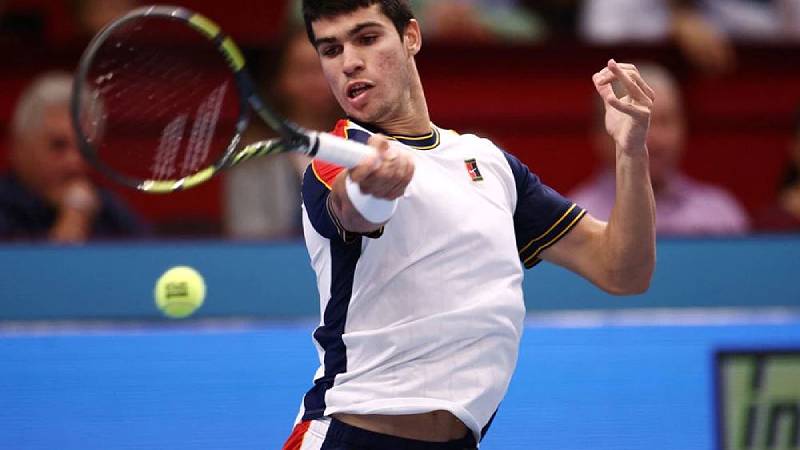 Holders Spain finally get the chance to try and retain their Davis Cup crown when the competition resumes in yet another new format across three European cities this week with all eyes on teenager Carlos Alcaraz in the absence of Rafa Nadal.

Two years ago in the inaugural edition of the revamped team event, a Nadal-inspired Spain claimed the title after an exhausting week in Madrid's Caja Magica.

The pandemic scuppered last year's 18-nation Davis Cup Finals and since then the International Tennis Federation (ITF) and partners Kosmos Tennis have moved to make the event more manageable, with Turin and Innsbruck added as co-hosts.

Starting on Thursday, the 18 finalists will compete in six groups of three with eight qualifying for the knockout rounds and the final taking place in Madrid on Dec. 5.

The spectre of Covid-19 has returned, however, and the two groups being staged in Innsbruck will have no fans cheering them on after Austria's reintroduction of a lockdown.

Impossibly late finishes to ties (comprising of two singles and a doubles) and smallish crowds for some matches tarnished what was an encouraging debut for the revamped Davis Cup Finals in Madrid in 2019, which is why it has been expanded to 10 days across three nations this time.

But Spain will feel right at home with Group A, which also includes a powerful Russian team and Ecuador, in Madrid.

They will not have talisman Nadal though as he continues his recovery from a foot injury. Instead, the focus will be on Alcaraz, the 18-year-old being tipped as the player most likely to fill the void when 20-time Grand Slam champion Nadal retires.

Alcaraz will be making his debut in the competition and will be joined by Roberto Bautista Agut, one of the heroes of 2019 when Spain beat Canada in the final, as well as Pablo Carreno Busta, Feliciano Lopez and Marcel Granollers.

"It was a dream that I had since I was a child and being able to make my debut is super beautiful and super special," Alcaraz, the world number 32, said this week.

"It will be a difficult challenge because only one team definitely gets through in the group and Russia has a great team, but I trust a lot in the Spanish team."

Spain begin on Friday against Ecuador.

On paper Russia look favourites, with world number two Daniil Medvedev and world number five Andrey Rublev spearheading their challenge, but Serbia will have world number one Novak Djokovic in their ranks in Group F in Innsbruck.

Serbia are up against Austria and a Germany side missing their top player Alexander Zverev.

"The (Olympiahalle) arena is great. It's a pity that we can't have an audience," Austria's Dennis Novak said.

"We have been looking forward to this week for one and a half years -- so now we'll give our all."

Britain, semi-finalists in 2019, are without Andy Murray but with in-form Cameron Norrie and Dan Evans they will be confident of progressing from Group C which also consists of France and the Czech Republic.

The United States, Davis Cup champions a record 32 times, are in Group E in Turin alongside Italy and Colombia.

Australia's Group D will also be in Turin with the Davis Cup heavyweights up against Croatia and Hungary while Group B contains Canada, Sweden and Kazakhstan.