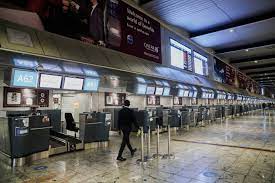 JOHANNESBURG: The heavily mutated Omicron variant of the coronavirus is rapidly becoming dominant in South Africa, less than four weeks after being detected there, authorities said yesterday, as other countries tightened their borders against the new threat.

The US identified its first case of the new variant in a fully vaccinated traveller who had returned from South Africa on November 22 and had mild symptoms, top US infectious disease expert Anthony Fauci said.

Hours earlier, airlines in the US had been told to hand over the names of passengers from parts of southern Africa hit by Omicron, which the World Health Organisation (WHO) said had now reached at least 24 countries, with cases ranging from mild to severe.

Early indications suggesting that Omicron may be markedly more contagious than previous variants have rattled financial markets, fearful that new restrictions around the world could choke off a tentative recovery from the economic ravages of the pandemic.

South Africa’s National Institute for Communicable Diseases (NICD) said Omicron’s profile and early epidemiological data suggested it was able to evade some immunity, but that existing vaccines should still protect against severe disease and death.

It said 74 per cent of all the virus genomes it had sequenced last month had been of the new variant, which was announced a week ago but was first found in a sample taken on November 8 in Gauteng, South Africa’s most populous province.

The number of new cases reported in South Africa doubled from Tuesday to yesterday.

WHO epidemiologist Maria van Kerkhove told a briefing that data on how contagious Omicron was should be available “within days”.

BioNTech’s chief said the vaccine it makes in a partnership with Pfizer was likely to offer strong protection against severe disease from Omicron.

The president of the European Union’s executive Commission said there was a “race against time” to stave off the new variant while scientists establish how dangerous it is. The EU brought forward the start of its vaccine roll-out for five-to-11-year-olds by a week to December 13.