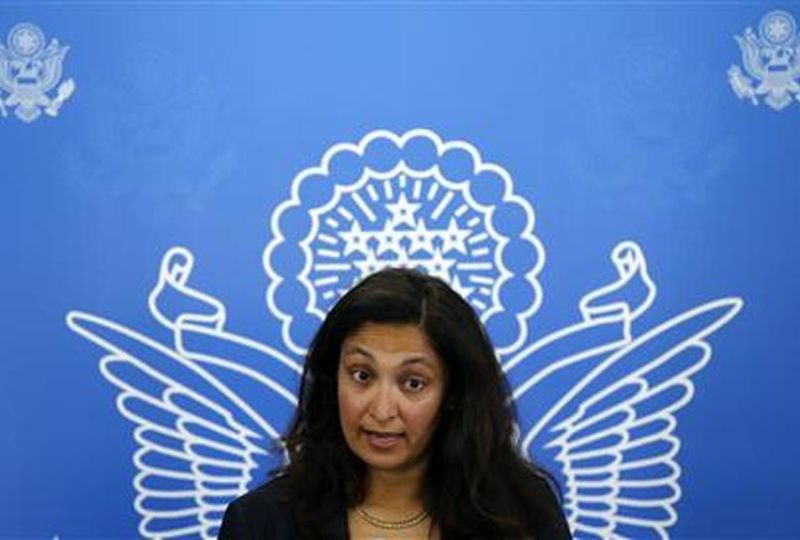 Uzra Zeya, Acting Assistant U.S. Secretary of State for Democracy, Human Rights and Labour, speaks at a news conference in Beijing August 2, 2013. The United States got few answers to questions about detained activists during its annual rights dialogue with China, and believes the situation in the country continues to deteriorate, Zeya said on Friday. (Reuters Photo)

GUATEMALA CITY - A U.S. State Department official on Wednesday expressed concern over reporters, corruption fighters and activists in Guatemala who have recently come under fire from the government.

Uzra Zeya, under secretary of state for civilian security, democracy, and human rights, said that she underscored the need for transparency and accountability during a four-day visit to Guatemala.

U.S. President Joe Biden's administration has repeatedly emphasized the need to tackle corruption in Guatemala and other Central American countries as part of an effort to stem record levels of migration from the region.

"Recent developments in Guatemala regarding threats and spurious legal actions against journalists, human rights defenders and anti-corruption champions are cause for concern," Zeya said in a statement from the U.S. Embassy in Guatemala on Wednesday evening.

The Guatemalan attorney general's office told Reuters it always acted objectively, impartially and in strict accordance with the law, and had an obligation to investigate complaints.

That did not mean it was engaging in political persecution, but rather doing its duty, the office added in a statement.

The Guatemalan presidency said it respects freedom of speech and journalism, as well as the independence of powers and each institution's legal mandate.

The foreign ministry did not immediately reply to a request for comment.

Guatemala's attorney general, Maria Porras, has previously rejected U.S. criticism, describing it as the work of the U.S State Department and not Biden. President Alejandro Giammattei has dismissed criticism of Guatemalan prosecutors as unjust.

Guatemala's attorney general in July removed an internationally known graft prosecutor from his post as head of the anti-corruption unit. He then fled the country.

On Tuesday, Guatemalan officials said they sought to charge the former prosecutor, Juan Francisco Sandoval, with fraud, conspiracy and abuse of authority.

Two well-known journalists who are vocal critics of the government have recently said they have been the target of criminal investigations, and police last month arrested three activists.