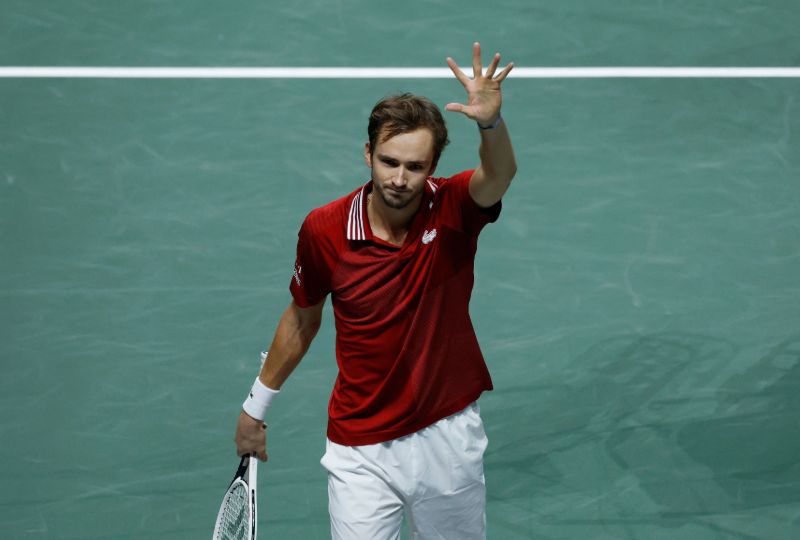 MADRID: Daniil Medvedev sent the Russian Tennis Federation through to a Davis Cup semi-final against Germany by beating Sweden's Mikael Ymer 6-4 6-4 on Thursday for an unassailable 2-0 lead in the tie.

Medvedev, the world number two, served for the match at 5-2 in the second set but suffered a break of serve and collected a warning for unsportsmanlike conduct for his reaction.

Ymer, who had been 4-3 up in the first set, then held serve before Medvedev collected himself and closed out the match with an ace. The Russians will play Germany on Saturday.

"Today I should have served better but really happy to bring the point to the team," said 25-year-old Medvedev, who served seven aces to Ymer's one.

"Madrid feels like home, we're winning a lot of matches. We beat Spain the other day so I think it was a great boost of confidence to beat the home favourites. It's always nice to beat someone at home in their country."

Rublev had to contend with a much more spirited fightback from the older Ymer before winning in two hours and 10 minutes.

The Russian raced through the first set in 26 minutes, converting two of three break points. However, he found it harder in the second, being broken by the Swede when serving for the match before Ymer won four games in a row to level.

The 25-year-old Ymer, ranked 171st in the world, carried that momentum into the third set while Rublev grew visibly frustrated.

Rublev failed to convert seven break point opportunities but prevailed in the tiebreak to seal the win.

The final doubles match between Aslan Karatsev/Rublev and Andre Goransson/Robert Lindstedt was not played.

Germany beat Britain on Wednesday to reach the last four. Croatia play world number one Novak Djokovic's Serbia in the other semi-final on Friday.

"We have a day off tomorrow so we can prepare well, be fresh," said Medvedev. "The most important thing is that we are winning a lot of matches, we didn't lose a tie in the group and really looking forward to Saturday."