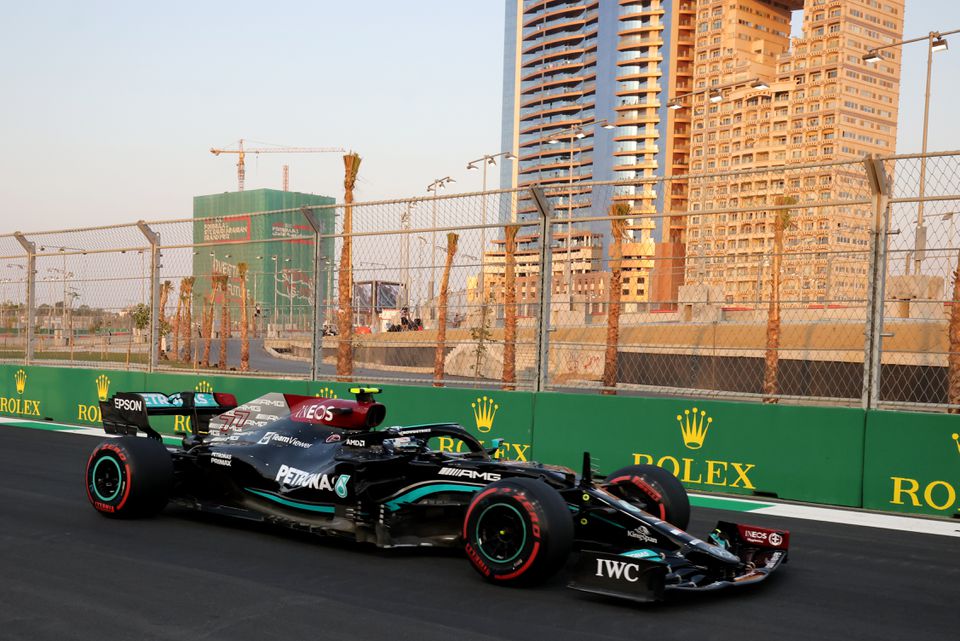 JEDDAH: Lewis Hamilton set the pace ahead of team mate Valtteri Bottas as they completed a one-two for Mercedes on the opening day of practice for the inaugural Saudi Arabian Grand Prix yesterday, while Ferrari’s Charles Leclerc walked away from a heavy crash.

The 36-year-old Briton, who pipped 24-year-old championship-leading Red Bull rival Max Verstappen in the opening hour of running, went even quicker at night under the floodlights, lowering his benchmark to one minute 29.018 seconds.

Bottas was 0.061 seconds behind while Verstappen dropped behind AlphaTauri’s Pierre Gasly to fourth, 0.195 seconds slower than his Mercedes rival.

The top three were separated by less than 0.1 seconds.

“I’m generally happy,” said Hamilton, who trails Verstappen by eight points in the overall standings and is gunning for a third successive win on Sunday to force a final-race title showdown with the Dutchman a week later in Abu Dhabi.

“As I said, made some changes between sessions.

“We’ll study through it tonight and work with the guys back at the factory and try and make sure we come with the correct set up for tomorrow.”

The Saudi Arabian Grand Prix is the first of only two races left on this year’s Formula One calendar, with the hard-fought battle of the generations between Hamilton and Verstappen racing towards its conclusion.

Verstappen has his first shot at wrapping up a maiden title with a race to spare this weekend. Hamilton, his sights set on an unprecedented eighth world title, can keep the battle alive into Abu Dhabi so long as he finishes at least fifth.

The pair were separated by 0.056 seconds in the first session, with Verstappen wasting no time attacking and exploring the limits of the track. But the Dutchman struggled to get heat into his soft tyres in the floodlit second hour of practice.

Mercedes could also wrap up a record eighth constructors’ title tomorrow if they score 40 points more than Red Bull.