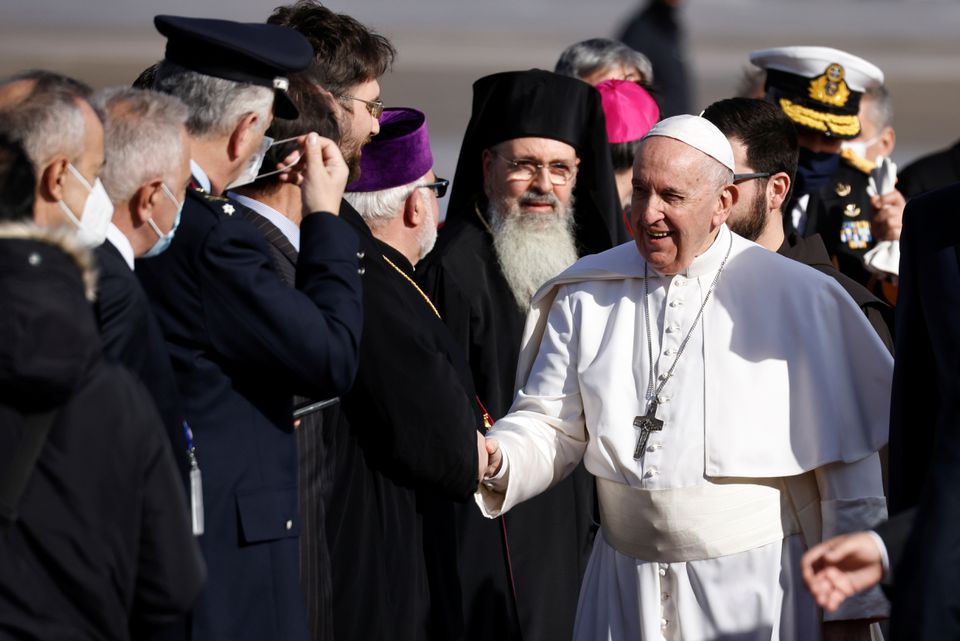 Pope Francis arrived in Athens on Saturday for the second leg of a visit to the Mediterranean that aims to draw attention to the plight of migrants and refugees.

After a two-day visit to Cyprus, the pope travelled to Greece, one of the main entry points into the European Union for asylum-seekers fleeing war and poverty-stricken homelands in the Middle East, Asia and Africa.

Young children in traditional Greek dress, a boy from Africa and a girl from the Philippines, greeted Francis as he stepped off the plane.

Francis, who has made defence of migrants and refugees a cornerstone of his papacy, will travel to the island of Lesbos for the second time on Sunday to visit a migrant reception center set up after the notorious Moria camp burned to the ground last year.

During a previous visit to the island in 2016, Francis walked through Moria, a camp decried by rights groups for its squalid and overcrowded conditions, and asylum-seekers fell to his feet, wept and begged for help.

He memorably took three Syrian refugee families with him on the plane back to Rome. The pope arranged to have 50 migrants from Cyprus relocated to Italy after his trip this week.

At an emotional meeting with asylum-seekers in Cyprus on Friday, Francis, citing conditions in Libya and elsewhere, said he had a responsibility to tell the truth about the suffering of refugees, many held in conditions he compared to those in Nazi and Soviet camps.

In Athens, the pope will meet Greece's president and prime minister as well as young people at a Catholic school. A large Mass is planned on Sunday evening at the Athens Concert Hall.

Authorities banned protests in central Athens during the three-day visit after healthcare workers and other groups said they were planning to demonstrate on Saturday against mandatory Covid-19 vaccinations outside parliament.

Some 5,000 police officers will be deployed to the streets of the capital on Monday, the last day of the pope's visit, which coincides with 13th anniversary of the police killing of a teenager. Often, the anniversary draws large crowds and violence.