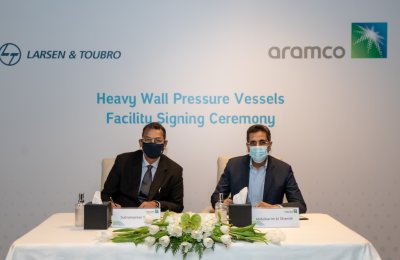 Saudi energy giant Aramco has signed an MoU with India's top engineering and construction conglomerate Larsen & Toubro (L&T) for the establishment of the region’s first Heavy Wall Pressure Vessels facility at Jubail Industrial City.
Spread over an area of 120,000 sq m, the new facility will be producing critical equipment for several industries, including the power and oil and gas sectors, said a statement from Aramco.
The MoU is in line with the Aramco Namaat program, launched in September, which aims to tap into the vast opportunities available in Saudi Arabia to create value, as well as drive economic expansion and diversification, it stated.
As per the deal, L&T will start construction of the new facility imminently, with production expected to commence by Q3 next year.
Aramco's Senior Vice President (Technical Services) Ahmed Sa’adi said: "This manufacturing facility will provide a large number of skilled job opportunities for Saudi youth, localize the “know how” of heavy wall vessels in the kingdom, and deploy the latest manufacturing technologies to serve the kingdom and Mena region."
"We expect this facility to help Aramco and others in the Kingdom to increase localization and optimize capital cost, he noted.
Aramco said its L&T collaboration comes as part of the group's efforts to develop the kingdom's manufacturing capabilities.
On the contract win, CEO SN Subrahmanyan said: "We believe this is another significant milestone for L&T in the kingdom and a strong testimony to our commitment to the development of the region."
L&T had in 2019 won a contract worth nearly $1.01 billion from Aramco for a major oil field development project in Marjan. The order was secured by one of its key subsidiaries, L&T Hydrocarbon Engineering Limited (LTHE) in consortium with Singapore-based global offshore contractor Emas AMC (A Subsea7 Company).
LTHE also won a large engineering, procurement, construction and installation (EPCI) project consisting of 28 offshore jackets from Saudi energy giant, he added.-TradeArabia News Service