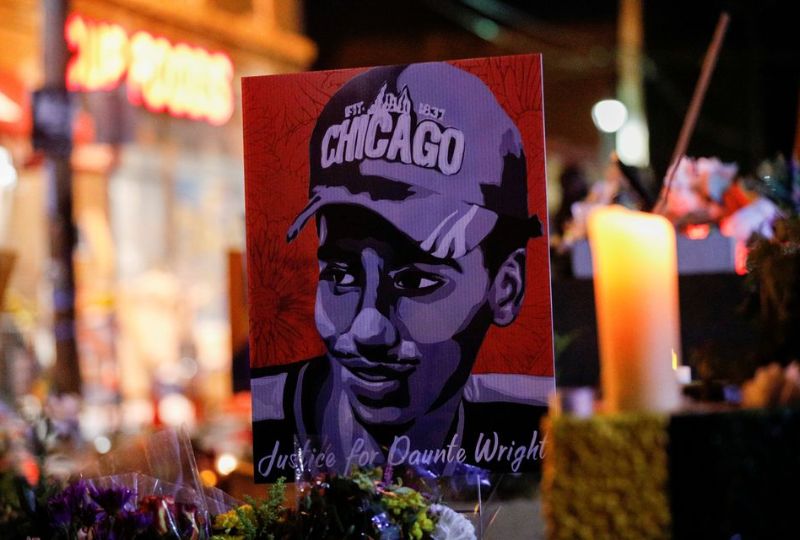 FILE PHOTO: A poster of Daunte Wright is seen after the guilty verdict in the Derek Chauvin trial was announced at George Floyd Square in Minneapolis, Minnesota, US. Reuters Photo.

A white Minnesota police officer who fatally shot an unarmed Black motorist in April, triggering protests against police brutality, will go on trial on Wednesday as opening statements to the jury get underway.

Kimberly Potter, a former police officer in a city north of Minneapolis, has said she mistakenly used her handgun instead of her Taser when firing at Daunte Wright, 20, as he attempted to flee in his car following a traffic stop.

Potter, 49, has pleaded not guilty to first and second-degree manslaughter charges, which carry maximum sentences of 15 and 10 years respectively. Her lawyers have said she will testify in her own defense.

Prosecutors are expected to use their opening remarks to stress the extensive training received by Potter, making her criminally culpable for the mistake, legal experts said. Potter, a 26-year veteran of the police force, had completed two Taser-specific training courses in the six months prior to the incident, according to the criminal complaint.

"You have to get across that this whole thing is about accountability," said Joe Tamburino, a criminal defense attorney not involved in the case, referring to the prosecution's strategy. "She is a highly trained police officer."

Potter's attorneys, on the other hand, will likely argue that she made an honest mistake under the intense pressure of the situation, and that while Wright's death was tragic, he created the danger by resisting arrest.

Jack Rice, a criminal defense attorney based in St. Paul, Minnesota, said the continued surge in gun violence across major US cities could help the defense. Minneapolis is edging closer to a record number of annual homicides in 2021.

"There is a perception that the only wall that is protecting society are these people in blue," Rice said. "The defense is going to use that."

Caught on Potter's body-worn camera, the shooting of Wright triggered several nights of demonstrations, with many calling the incident another example of police violence against Black Americans and some demanding Potter be charged with murder.

The shooting garnered particular attention in part because it occurred just a few miles north of where Derek Chauvin, a white former Minneapolis police officer, was standing trial in the case of George Floyd, a Black man whose death during a May 2020 arrest set off nationwide racial justice protests.

The Potter trial is being held in the same Hennepin County courtroom where a jury in April convicted Chauvin of murder.

To prove first-degree manslaughter, prosecutors must show Potter killed Wright while committing the misdemeanor offense of recklessly handling a firearm. The second-degree charge requires that Potter be found to have caused Wright's death through culpable negligence.

On Wednesday, legal experts said prosecutors would likely preview the planned testimony of Seth Stoughton, a use-of-force expert and professor at the University of South Carolina School of Law who also testified for the state in the Chauvin trial.

In an October court filing, Paul Engh, one of Potter's attorneys, argued Stoughton would promote a "false narrative" that the officers should have allowed Wright to flee the scene. Rather, Engh wrote, it was Wright who created a dangerous situation and a Taser was necessary to stop him.

For the defense, the most important witnesses include Laurence Miller, a forensic and police psychologist slated to testify about how the brain can "slip" and choose an unintended but more common action, and Potter herself.

Potter can be heard on her body camera video shouting "I'll tase you," at Wright, who was struggling to get away from another officer's grip. After shooting Wright, Potter said: "I grabbed the wrong (expletive) gun".

Mike Brandt, a Minneapolis-area defense attorney, said he expected Potter's lawyers to argue that the shooting was the result of a split-second decision made under duress - an assertion her own testimony would seek to drive home.

"If she comes across as likeable and sympathetic the jury could be more likely to acquit," Brandt said.