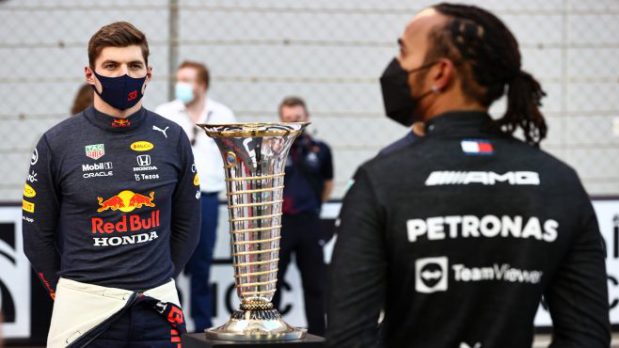 Verstappen and Hamilton before the race

The 24-year-old handed Red Bull their first title since 2013 in Abu Dhabi on Sunday when he overtook Mercedes’ seven times world champion Lewis Hamilton on the last lap of the final race of the season.

Mercedes had two protests dismissed but have signalled they intend to take the matter further.

Hamilton and his father Anthony congratulated Verstappen and father Jos after the race but Wolff stayed out of sight.

“Toto sent me a text, congratulations on the season and that I deserved to win it, so that was very nice of him of course,” Verstappen, slightly worse for wear after a long night of partying, told reporters yesterday.

“Lewis is a great sportsman in general. He came up to me and congratulated me and it must have been of course very tough in that last lap,” he added. “But it also shows the respect we have for each other.

“Of course we had our tough times throughout the season but in the end we respect what we were doing and we were pushing each other to the limit the whole season. It has been really enjoyable racing against him.”

Verstappen had to wait some hours for the stewards to dismiss the protests but then it was party time with the whole team, from engineers to caterers, celebrating into the dawn. The champion admitted to some nerves on Saturday night, when he was itching for the battle to start, but he had managed to sleep. There was no disappointment in the race finishing amid controversy, a safety car period ending just in time for one crucial lap of racing thanks to the intervention of race director Michael Masi.

“I think it just sums up the whole season in general. It’s been pretty crazy and intense,” said Verstappen.

Meanwhile, Hamilton said over his team radio at the end of the Abu Dhabi Grand Prix that the race had been “manipulated”, it has emerged.

The Mercedes driver was magnanimous in his interviews after the race, but on the final lap, after Verstappen had passed him, Hamilton said: “This has been manipulated, man.”