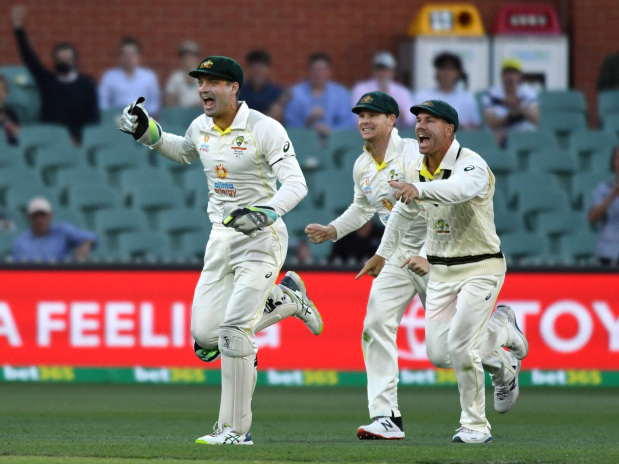 ADELAIDE: England have not won an Ashes series in Australia since 2010-11, and their decade of drought Down Under is almost certain to continue after Joe Root’s team slipped 2-0 behind their nemesis yesterday.

It was Root’s 23rd Test defeat as captain, the most for an England skipper, while Australia maintained their perfect pink-ball record by winning their ninth day-night Test in as many matches.

Unlike in the series opener in Brisbane, England managed to take the day-night second Test to its final day, but the nature of their 275-run defeat was equally deflating.

It came against an Australia side depleted by the absence of regular skipper Pat Cummins, withdrawn hours before the match for being a close contact of a positive Covid-19 case, and the injured Josh Hazlewood.

England’s second successive loss was a matter of when and not if after Australia set them an improbable victory target of 468 and made early dents with the pink ball.

Jos Buttler, who dropped catches behind the stumps, tried to redeem himself with a dogged 26 off 207 balls in an obdurate rearguard spread over more than four hours, but could not gloss over England’s batting frailties as they folded for 192.

England brought back veterans James Anderson and Stuart Broad, sacrificing the express speed of Mark Wood, in an all-seam attack but the move did not really pay off.

The sight of seamer Ollie Robinson bowling off-spin on Sunday perfectly captured the plight of an England side who have looked inferior in all departments of the games.

Captain Joe Root urged them to replicate Buttler’s fight to stay alive in the series.

“The Ashes are on the line here, if that is not motivation, I don’t know what is,” Root said.

“I am extremely proud of the way the guys fought today, that attitude and desire that’s how we need to go about a whole test match.”

For the hosts, Mitchell Starc and Nathan Lyon led their inexperienced bowling attack, while Steve Smith smashed 93 in the first innings, took some sharp catches in the slip, and adroitly marshalled his bowlers to lead them to victory.

Replacing Hazlewood in the playing XI, Jhye Richardson gave a good account of himself claiming 5-42 in England’s second innings.

Cummins and Hazlewood will be back for the Boxing Day Test in Melbourne and Smith ruled out taking their foot off the pedal.