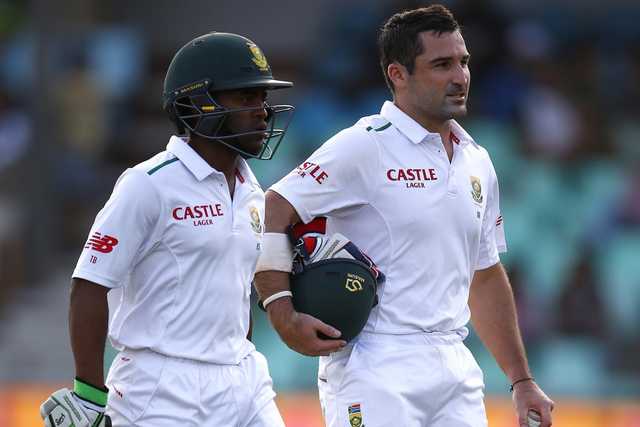 Dean Elgar and Temba Bavuma of South Africa walk off at the close of play during day two of the 1st Test between South Africa and England at Sahara Stadium Kingsmead on December 27, 2015 in Durban, South Africa.

Test captain Dean Elgar says he will not let the allegations of racist conduct that have come to light at Cricket South Africa in recent months become an excuse for failure as his side prepare to host India in a three-match series from Sunday.

Director of cricket Graeme Smith, who denies the claims, and national team coach Mark Boucher were among a number of CSA employees implicated in “tentative findings” made by the Social Justice and Nation Building Ombudsman into alleged past discrimination.

CSA confirmed yesterday they would investigate the conduct of everyone implicated in the report, though only once the series with India has concluded.

“What happens off the field for me is irrelevant now,” Elgar told reporters yesterday. “As a playing unit we have been through such crappy times (amid the Covid-19 pandemic) that we have formulated such a good bond within our group.

“We must be mindful that if things are bad off the field, we can’t use that as a cop-out for us. We are a professional team and professional players.”

Elgar appeared to give his backing to Boucher after former test spinner Paul Adams said he had been called a “brown s--t” in a South Africa team song during his time in the side, including by former wicket-keeper Boucher, who has since apologised.

“From the player’s point of view, we back our coaches and management,” Elgar said.

“They put in so much work that goes unnoticed, and it gets watered down by the media. I know what they do behind the scenes. It is not nice to see our coaches get lambasted for things.”

South Africa have, meanwhile, revealed they will be without fast bowler Anrich Nortje for the series after he failed to sufficiently recover from injury. They will not be calling up a replacement.