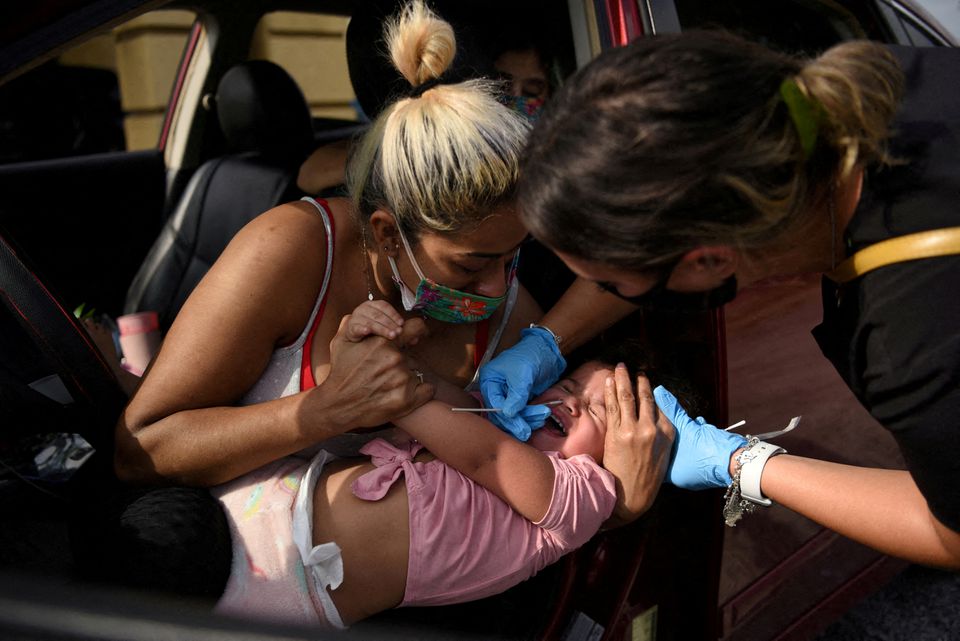 A healthcare worker tests a child for the coronavirus at a drive-through testing site as the Omicron variant continues to spread through the country in Houston, Texas, U.S., December 29, 2021. - Reuters Photo

U.S. health experts on Thursday urged Americans to prepare for severe disruptions in coming weeks as the rising wave of Covid-19 cases led by the Omicron variant threatened hospitals, schools and other sectors impacting their daily lives.

The warning came as the United States reached a record high in Covid-19 cases, while federal officials issued more travel warnings and reportedly prepared to authorize booster shots for 12 to 15-year-olds next week.

For the second day in a row, the United States had a record number of new reported cases based on the seven-day average, with more than 290,000 new infections reported each day, a Reuters tally showed.

The surge comes amid increased holiday travel, with New Year's celebrations still to come, and as schools grapple with students' return to classrooms following winter breaks.

"We are going to see the number of cases in this country rise so dramatically, we are going to have a hard time keeping everyday life operating," Dr. Michael Osterholm, an infectious disease expert at the University of Minnesota, told MSNBC.

Dr. Anthony Fauci, the nation's top infectious disease official, on Wednesday said cases will likely rise throughout January, a warning echoed by the governor of Louisiana, where hospitalizations have more than tripled in the past two weeks.

"We are still at the very beginning of this current surge," John Bel Edwards told a news conference on Thursday. "January is going to be very, very challenging."

U.S. health officials have said early data show Omicron appears less severe but have continued to push vaccinations, masks and physical distancing. The Centers for Disease Control and Prevention (CDC) has also issued new guidelines shortening isolation and quarantine periods, which have been criticized by some disease experts and health care workers.

U.S. health regulators plan to approve a third vaccine dose for 12 to 15-year-olds next week, according to media reports. Boosters are already approved for those 16 and older.

With testing shortages and breakthrough cases, experts warn the surge would stress hospitals and businesses, although some state and city leaders said on Thursday they would keep schools open for children returning from winter break next week.

"We are committed in Arkansas to in-class instruction," Arkansas Governor Asa Hutchinson said. "It’s so important to our future, to our students, to their mental health."

Rising hospitalizations as healthcare workers are sidelined with their own Covid-19 infections is also concerning, as are fewer effective therapeutics, Dr. Peter Hotez, an infectious disease expert at Baylor College of Medicine, told CNN.

A rise in in hospitalization of children across the United States has also fueled concerns.

Already, 825,663 people have died in the United States from Covid-19 since early 2020, data showed, with the latest wave of hospitalizations driven by those not vaccinated.

President Joe Biden this month announced new plans to combat Omicron, but some experts have criticized the measures as arriving too late.

Cruise operators took a hit on Thursday after the CDC warned people to avoid cruises regardless of their vaccination status due to onboard outbreaks, a potential drag on an economy that otherwise appears to be holding up.

While airline travel has been widely disrupted, holiday sales were strong, new claims for state unemployment benefits fell last week to their lowest level of the pandemic, and U.S. stocks hit record highs on Thursday.

How schools handle the surge is also key, especially for working parents. U.S. Education Secretary Miguel Cardona told MSNBC that schools should stay open and that federal funds were available for staffing and testing to help make that happen.

"We can't shut down our city again," New York City Mayor-elect Eric Adams said while unveiling his plan on Thursday to fight Covid-19 while keeping the country's most populous city -- including its schools -- open for business.

"We do have light at the end of the tunnel," said University of Minnesota's Osterholm. "But for right now, you're going to have to hunker down."

In Arkansas, which on Thursday reported a record high of 4,978 new cases, Hutchinson said the state would make 1.5 million at-home tests available to residents, a move he hoped would free up health care workers to staff hospitals.

West Virginia Governor Jim Justice urged the relatively high proportion of unvaccinated people in his state to get inoculated but said he was against mandates.

If the situation worsens "and a bunch more people die, you'll have a run on the bank as far as people running to get vaccinated or to get their booster shots," Justice said.