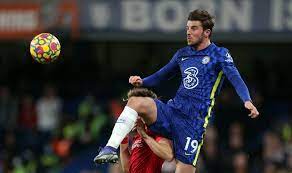 LONDON: Leaders Manchester City were the beneficiaries as Chelsea and Liverpool shared the spoils in a thrilling 2-2 Premier League draw last night, while Leeds United pulled eight points clear of the relegation zone with a 3-1 win over Burnley.

City’s last-gasp 2-1 win at Arsenal on New Year’s Day had moved the reigning champions 11 points clear of Chelsea in second and 12 in front of third-placed Liverpool ahead of the latter pair’s meeting at Stamford Bridge.

Despite Liverpool’s coach Juergen Klopp, goalkeeper Alisson, Roberto Firmino and Joel Matip all missing the match having tested positive for Covid-19, the Reds looked set to close the gap on City to nine points after racing into a 2-0 lead.

Sadio Mane and Mohamed Salah put Liverpool in command inside 26 minutes with Chelsea, who left Belgium striker Romelu Lukaku out of their matchday squad following an interview in which he was critical of coach Thomas Tuchel’s tactics, all at sea.

However, a stunning strike from Mateo Kovacic and Christian Pulisic’s powerful finish brought Chelsea level before halftime, with both sides then having chances to win a pulsating clash.