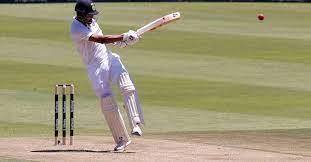 JOHANNESBURG: Rookie bowler Marco Jansen took four wickets as South Africa bowled India out for 202 in their first innings on the opening day of the second Test at the Wanderers yesterday.

The 21-year-old Jansen, playing in only his second Test, returned impressive figures of 4-31 in 17 overs after India had won the toss and elected to bat on a wicket that they expected to offer rewards for the batsmen.

South Africa were 35-1 in reply at the close of play, with captain Dean Elgar (11 not out) and Keegan Petersen (14 not tout) to return today.

Opener Aiden Markram was removed early for seven as the home team began their reply, caught leg before wicket by Mohammed Sami as he missed a straight delivery.

India suffered a blow before the start when captain Virat Kohli pulled out of the Test with an upper back strain, but stand-in skipper KL Rahul made 50 as he attempted to lead from the front on a spongy wicket.

Ravichandran Ashwin added a potentially valuable 46 but overall it proved a disappointing day for the batsmen after the tourists’ dominant performance in the first Test in Pretoria last week, which India won by 113 runs.

Jansen took the opening wicket yesterday, inducing Mayank Agarwal into a fine edge for 26 and then adding Rahul’s wicket after he played a rare poor shot, hooking the ball to fine leg where Kagiso Rabada made a superb diving catch.

The tall left-arm quick also snagged Rishabh Pant for 17 before Ashwin hit a ball straight into the sky for Petersen to take one of three catches.

Duanne Olivier, returning to the Test arena for the first time in almost three years, and Rabada finished with identical figures of 3-64.

Olivier took two wickets in two balls before lunch with Cheteshwar Pujara caught off a top edge for three followed by Ajinkya Rahane, out first ball as he was caught by Petersen at second slip.

The 29-year-old Olivier exploded onto the Test scene in 2017 as he took 48 wickets in 10 Tests at an average below 20, but then took up a Kolpak contract with English county Yorkshire that meant he could not play for South Africa.

But after returning home when the Kolpak system fell away due to the United Kingdom’s exit from the European Union, Olivier finished the top wicket-taker in the domestic four-day competition and won back a Test place.