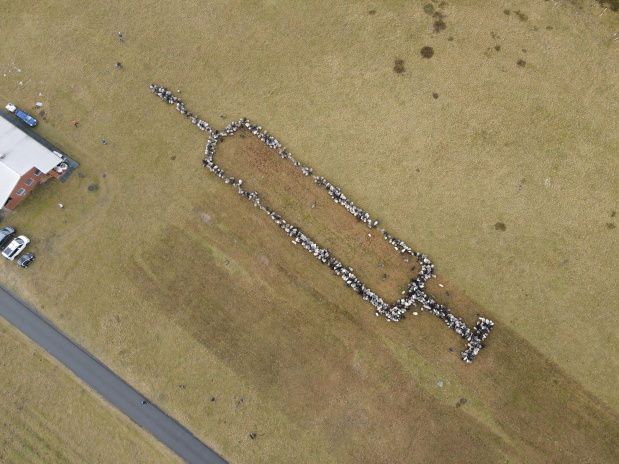 A German campaigner is hoping the emotional appeal of 700 sheep forming the shape of a giant syringe will reach the hearts and minds of people hesitating to take a Covid-19 injection.

Germany has lower vaccination rates most other Western European nations, although some are simply unsure if they should get a jab rather than vehemently opposed to vaccination.

"Sheep are popular with people and carry positive emotional connotations. So perhaps they can reach many people emotionally when logic and scientific reasoning don't do the job," the organiser of the campaign, Hanspeter Etzold, told Reuters.

Etzold works with shepherds, companies and animals to run team-building events in the northern German town of Schneverdingen.

"I have noticed how enthusiastically the sheep are received and that it simply reaches people deep inside, which is perhaps not possible rationally, with rational arguments," he said.

The animals, which belong to shepherd Steffen Schmidt and his wife, followed pieces of bread spread on the ground to form the 100 metre long syringe shape as they were filmed by drone.

According to the German Robert Koch Institute for infectious diseases, 71.3% of Germany's population had received two doses of a Covid-19 vaccine and 39.3% had received booster shots by Tuesday.

This places Germany among Western European countries with the lowest vaccination rates, data from the European Centre for Disease Prevention and Control shows.

At the same time, only around 5%-10% of Germans are vehemently opposed to vaccination and the rest are undecided, according to RKI data.