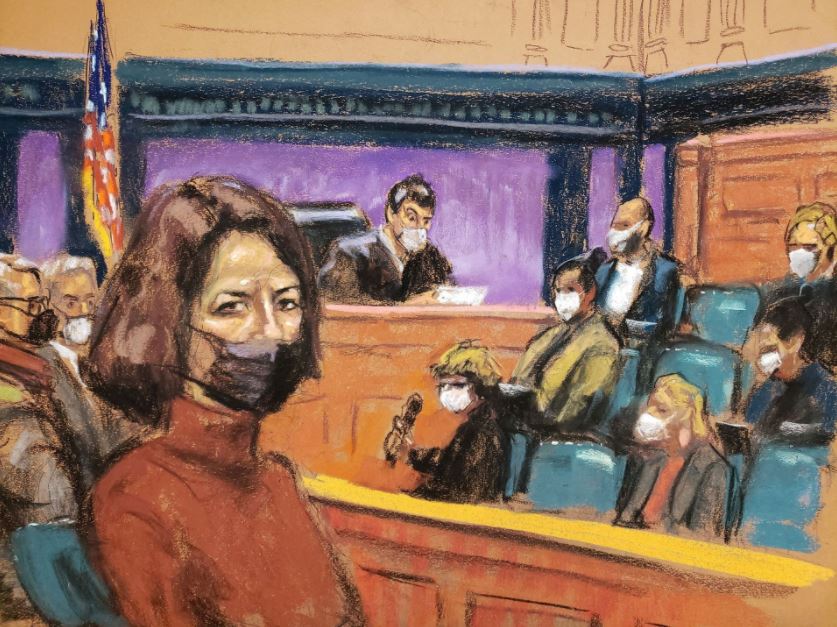 Jeffrey Epstein associate Ghislaine Maxwell sits as the guilty verdict in her sex abuse trial is read in a courtroom sketch in New York City, US, December 29, 2021. (Image credit: Reuters)

Ghislaine Maxwell, who was convicted last week of aiding Jeffrey Epstein's sexual abuses, deserves a new trial, her lawyer said on Wednesday after a juror told media including Reuters that he had been a victim of sexual abuse.

In a letter to US District Judge Alison Nathan in Manhattan, who presided over Maxwell's trial, the lawyer, Christian Everdell, said there were 'incontrovertible grounds' for Maxwell to get a new trial, to serve the interest of justice.

He called the matter "an issue of pressing importance," saying disclosures by the juror "influenced the deliberations and convinced other members of the jury to convict Ms Maxwell."

Everdell filed the letter shortly after asking Nathan to open an inquiry into the juror's statements.

Nathan's decision on whether a new trial is warranted could hinge on how the juror responded to questions during jury selection about his experiences with sexual abuse, which legal experts said was a key question that defense lawyers were looking at to weed out potentially biased jurors.

The office of US Attorney Damian Williams, which prosecuted Maxwell, declined to comment.

Maxwell, 60, was convicted on December 29 of sex trafficking and other charges for recruiting and grooming underage girls for Epstein to abuse between 1994 and 2004.

Epstein, a financier and convicted sex offender, killed himself in August 2019 in a Manhattan jail while awaiting his own sex trafficking trial.

The juror, who asked to be identified by his first and middle names, Scotty David, told Reuters on Tuesday evening that during deliberations, after some jurors expressed skepticism about the accounts of two of Maxwell's accusers, he shared his experience of having been sexually abused as a child.

Scotty David did not immediately reply to a request for comment on Wednesday.

Following the request for a new trial, attorney Todd Spodek made an appearance in the case and said in a court filing that he was representing Juror No. 50. Spodek did not give the juror's name and did not immediately reply to a request for comment.

Hundreds of prospective jurors filled out questionnaires that asked them, among other things, if they or their family members had experienced sexual abuse or assault.

During follow-up questioning, Nathan asked those who answered 'yes' if they would still be able to be fair and impartial.

Scotty David told Reuters he did not recall a question about personal experiences with sexual abuse on the questionnaire, but that he would have answered honestly. He said he 'flew through' the questionnaire.

He said Nathan did not ask about his personal experience with sexual abuse during follow-up questioning.

During follow-up questioning on November 16, Juror No. 50 told Nathan that he had read a news article and seen a CNN broadcast about Epstein's death. The juror said he heard that Epstein had a girlfriend, but that he otherwise knew nothing about Maxwell.

When Nathan asked Juror No. 50 if he could put aside anything he read or heard to reach an impartial verdict, he replied, "Yes, absolutely."

Prosecutors said the juror's statements to the media 'merit attention' by the court and asked for a hearing to be scheduled in about a month.

Media cited by prosecutors include Reuters, the Daily Mail and The Independent.

Later on Tuesday, The New York Times reported that a second juror described having been sexually abused as a child during deliberations. That juror, who requested anonymity to speak to the Times, said this revelation appeared to help shape the jury's discussion.

Moira Penza, a partner at the Wilkinson Stekloff law firm and a former federal prosecutor, said any inquiry into Scotty David would likely focus on whether the juror made a mistake or omission in answering questions on an initial screening questionnaire for prospective jurors or follow-up questions from the judge.

"Defense lawyers will argue that this question was so part and parcel to figuring out that juror's bias or any juror's bias," she said.

Penza said there have been instances where courts granted new trials based on 'purposeful lies or omissions' during the process of screening jurors, known as voir dire, which she said "is not what we're hearing so far."

Maxwell faces up to 65 years in prison for her conviction.

Nathan gave Maxwell's lawyers until January 19 to formally request a new trial and explain whether an inquiry is needed, with a response from prosecutors due by February 2.

Maxwell separately faces trial on two perjury counts for allegedly lying about her knowledge of Epstein's behavior during a deposition for a civil case. The date of the perjury trial has not yet been set.