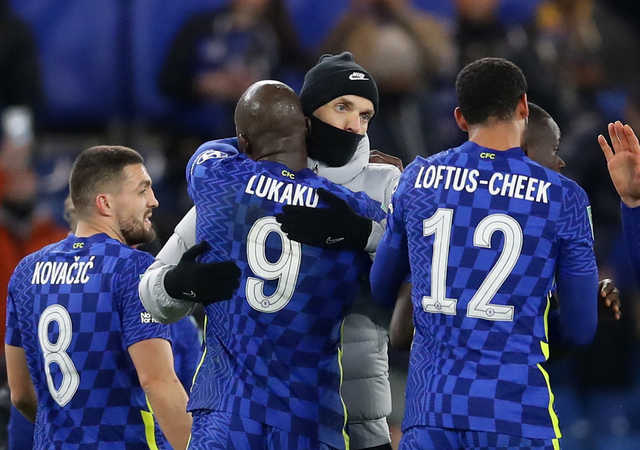 LONDON - Romelu Lukaku did not mark his return to the Chelsea side with a goal but earned praise from boss Thomas Tuchel after Wednesday's 2-0 League Cup semi-final win over Tottenham Hotspur.

The Belgian striker had apologised on Tuesday for saying in a TV interview he was dissatisfied with his role at Stamford Bridge since joining from Inter Milan for a club-record fee of $132.5 million in the close season.

He was left out of the squad for the 2-2 Premier League draw with Liverpool at the weekend but Tuchel said he had no qualms about including him against Tottenham.

"I am happy with the performance, I liked how he played," Tuchel told reporters. "He was strong, involved and showed huge commitment in our defensive work which was important.

"I expected it honestly because Romelu can handle pressure and adversity. He seemed to be relaxed after the decision was made, after we finished our talks, and after he finished his talks. The decision was made and I felt him relaxed enough to have a performance like this."

Four draws in their last five Premier League games have stalled Chelsea's title challenge and left them 10 points behind leaders Manchester City, so Wednesday's win was a welcome boost for a Chelsea side hit with injuries and Covid-19 cases.

Defender Thiago Silva and midfielder N'Golo Kante were ruled out on Wednesday after testing positive for Covid-19 and Havertz broke his finger and was substituted at halftime.

They are also without injured fullbacks Reece James and Ben Chilwell, yet still managed to dominate Tottenham.

"I liked this performance. It was far from normal today against Tottenham who are compact and full of confidence," he said. "We had two last-minute bad news with Thiago (Silva) and N'Golo (Kante) who were both supposed to start.

"We decided yesterday at the last minute to switch to a back four and the guys were very committed, open and focused to play how we played."

His only regret was that they did not create a "bigger cushion" for next week's second leg.

"We created a lot and were very strong because it is so hard to create against Tottenham as we've seen in the last few games," he said. "In the second half, we created a lot, big chances to have a third or fourth goal.

"Everybody knows the game isn't decided and we have to arrive at full focus and top shape again. We will need another 90 minutes of top-quality football to go through to Wembley."