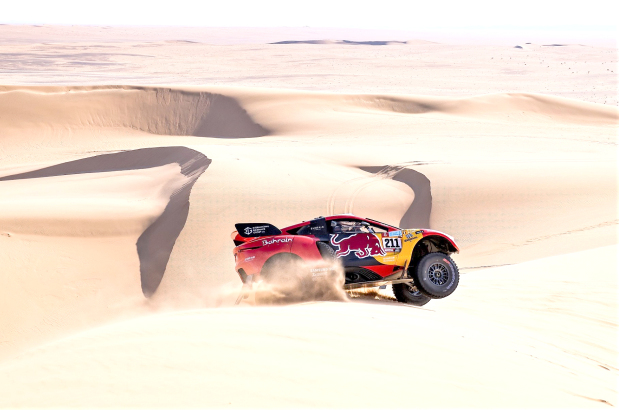 Sebastien Loeb increased the pressure for Bahrain Raid Xtreme in the Dakar Rally as he slashed another seven minutes off the lead held by Nasser Al Attiyah in Saudi Arabia.

Partnered by Fabian Lurquin in their BRX Prodrive Hunter, the nine-times World Rally

With Al Attiyah managing only the 11th best time on the 395 km stage from Al Dawadimi to Wadi Ad Dawasir, Loeb reduced the Qatari’s overall advantage to 37 mins 58 secs with four more stages amounting to 1,172-km left before Friday’s finish in Jeddah.

After closing the gap by 12 mins 27 secs in two days. Loeb and Lurquin are counting on the strength, versatility and unquestionable speed of the Prodrive Hunter to keep them in the hunt for a first Dakar victory.

It was also another rewarding day for team-mates Orlando Terranova and Dani Oliveras who set the sixth fastest stage time in their Prodrive Hunter to continue their impressive climb to fifth in the overall rankings.

Two-dimes Dakar winner Nani Roma and Alex Haro in the third Prodrive Hunter ran out of luck when a suspension problem forced them to stop to carry out repairs, losing an hour in time.

Loeb completed the stage to say: “It was not easy. We had to push really hard from the start to the end because we were opening the road, so we just wanted to stay ahead and not have Nasser following, so we pushed hard very quickly.

“We had a puncture that we changed super fast before we got to the neutralisation point, but once there we discovered we had lost our other new spare wheel. It was the only new one we had so I had to be very careful towards the end and I lost time as such but I think I did a good stage there.”

Terranova said: “It’s great to be fifth overall now as that’s another place higher up the order for us. We lost a lot of time in Vasilyev’s dust as we were stuck behind him for over 120kms. We tried to push and pass him. I know we were close to Seb’s time which is great to see, but frustrating too to be stuck behind someone for so long and then take big risks to get past them.”

Roma said: “We did a jump, nothing hard or out of the ordinary as we’d taken 100,000 jumps harder. But maybe we just clipped a rock so we had to repair the suspension quickly to then continue. The rest of the car is continuing to be perfect so thank you everyone at BRX once more for their work.”