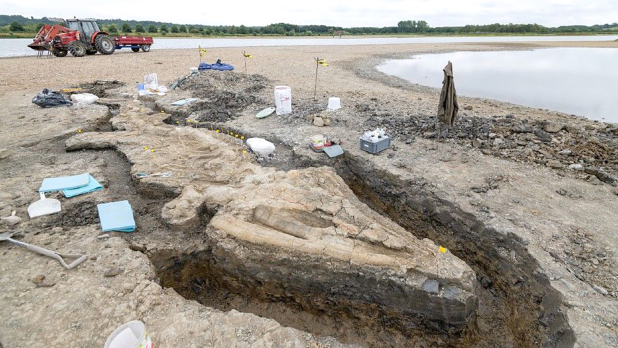 LONDON: A gigantic prehistoric “sea dragon” discovered in the UK has been described as one of the greatest finds in the history of British palaeontology.

The 33ft (10m)-long ichthyosaur fossil, which is about 180 million years old, was found at Rutland Water Nature Reserve.

Similar in shape to dolphins, the reptiles varied in size from three to 82ft.

Anglian Water, which owns the area, said it was now seeking funding to protect and display the remains nearby.

As well as being the biggest, it is also the most complete fossil of its kind found in the UK and is also thought to be the first ichthyosaur of its specific species (Temnodontosaurus trigonodon) found in the country.

When lifted for conservation and study, the block containing the 6ft (2m) skull and surrounding clay, alone weighed a tonne.

It was discovered by Joe Davis, conservation team leader at Leicestershire and Rutland Wildlife Trust, during the routine draining of a lagoon island for re-landscaping in February 2021.

“The find has been absolutely fascinating and a real career highlight,” Mr Davis said.

“It’s great to learn so much from the discovery and to think this amazing creature was once swimming in seas above us.

“Now, once again, Rutland Water is a haven for wetland wildlife albeit on a smaller scale.”

Palaeontologist Dr Dean Lomax has studied thousands of ichthyosaurs and was head of the excavation team.

“It was an honour to lead the excavation,” he said.

“Britain is the birthplace of ichthyosaurs - their fossils have been unearthed here for over 200 years.

“Despite the many ichthyosaur fossils found in Britain, it is remarkable to think the Rutland ichthyosaur is the largest skeleton ever found in the UK.

“It is a truly unprecedented discovery and one of the greatest finds in British palaeontological history.”

Palaeontologists will continue to research the discovery, with academic papers to be published in the future.

The fossil is currently being studied and conserved at an undisclosed location in Shropshire but it is expected to be returned to Rutland for permanent display.

While the skeleton is the largest ever found in the country, it’s not the first ichthyosaur to be discovered in the reservoir. Sections of two smaller ichthyosaurs were previously found in the area in the 1970s, and fossils of the creature have been unearthed in different areas of Britain for more than two centuries.