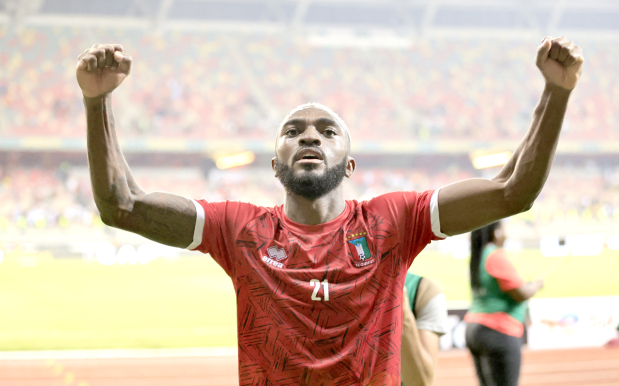 Equatorial Guinea’s Obiang celebrates with fans after the Algeria match

DOUALA: Esteban Obiang scored 20 minutes from time as Equatorial Guinea pulled off one of the great Africa Cup of Nations finals upsets with a 1-0 win over defending champions Algeria last night.

The shock Group E result leaves Algeria bottom of the standings and needing a win in their last group game against the Ivory Coast on Thursday to stand any chance of advancing.

Obiang struck from a corner as the tiny nation of 1.4-million ended Algeria’s run of 35 unbeaten internationals, inflicting their first defeat since October 2018.

Equatorial Guinea now have three points, one behind the Ivorians on four, with Sierra Leone on two and Algeria with one.

Earlier, Hamza Mathlouthi and Wahbi Khazri scored goals inside the opening nine minutes to set up a comfortable 4-0 victory for Tunisia over Mauritania in their Group F match at the Limbe Stadium on Sunday.

Khazri added another in the second half and then laid on a fourth for Seifeddine Jaziri as Tunisia were vastly improved, having lost their opener to Mali in controversial fashion when Zambian referee Janny Sikazwe erred by twice ending the game before the 90 minutes.

Tunisia, who missed a late penalty from Youssef Msakni, have three points from their opening two matches and are in third in the group behind Gambia and Mali, who have four points each. Mauritania will finish bottom after two defeats.

The top two teams in each group advance to the second round, along with the four best third-place finishers across the six pools.

A goalkeeping howler handed Sierra Leone a dramatic last-gasp equaliser that secured a 2-2 draw with Ivory Coast in their Group E clash.

Goalkeeper Badra Ali Sangare lost control of the ball and spilt it for Sierra Leone’s Alhaji Kamara to snatch a 95th-minute goal as they grabbed their second point of the tournament after holding defending champions Algeria 0-0 last week.

Ivory Coast now have four points while Sierra Leone are on two with Algeria to take on Equatorial Guinea in Sunday’s second Group E match at the Japoma Stadium.