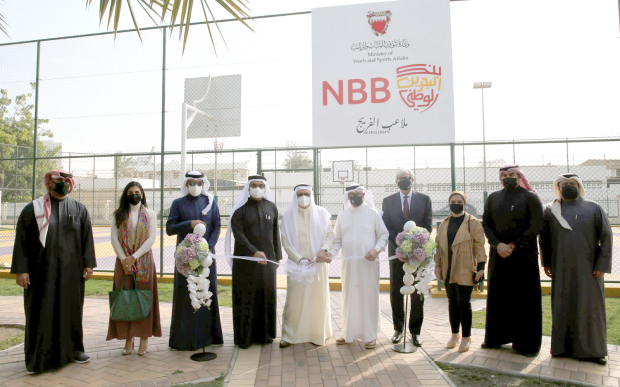 Officials and guests during the inauguration of one of the grounds

NEW football grounds were opened in the gardens of Abu Ghazal, Ain Qasari and Busaiteen as part of the initiative launched by His Majesty the King Hamad’s representative for humanitarian work and youth affairs Shaikh Nasser bin Hamad Al Khalifa.

The ceremony was attended by MPs Ahmed Al Salloum and Hamad Al Kooheji, along with officials from the Ministry of Youth and Sports Affairs, the GSA and NBB.

Almoayyed stressed NBB’s support to the initiatives spearheaded by Shaikh Nasser as part efforts to promote the youth and sport sector in Bahrain.

NBB co-operated with the ministry to construct the stadiums as part of its social responsibility strategy to support youth and sports in Bahrain.