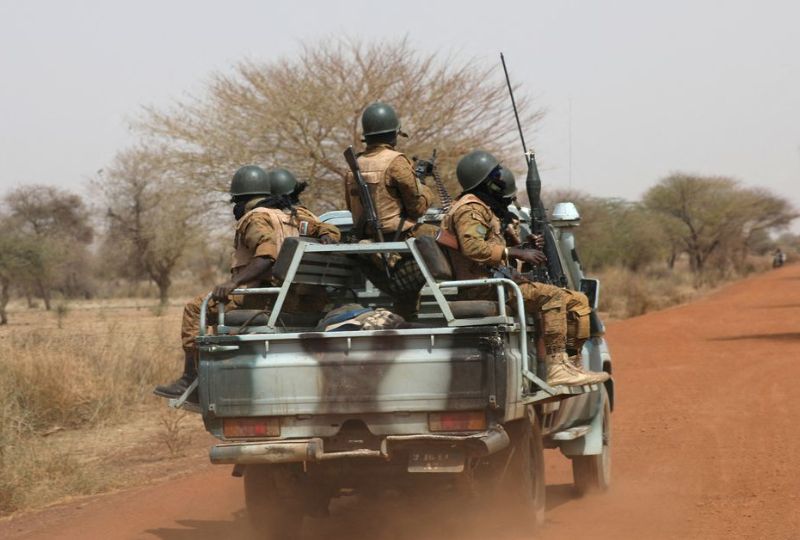 Soldiers from Burkina Faso patrol on the road of Gorgadji in the Sahel area, Burkina Faso March 3, 2019. (Reuters Photo)

OUAGADOUGOU: Gunfire rang out from several military camps in Burkina Faso early on Sunday, the government said, but it denied the military had seized power.

Heavy arms fire at the capital Ouagadougou's Sangoule Lamizana camp, which houses the army's general staff and a prison whose inmates include soldiers involved in a failed 2015 coup attempt, began at least as early as 5:00 a.m. (0500 GMT), a Reuters reporter said.

The reporter later saw soldiers firing into the air in the camp, and the air base close to Ouagadougou airport. A witness also reported gunfire at a military camp in Kaya, around 100 kms north of Ouagadougou.

Burkina Faso's government confirmed gunfire at some military camps but denied reports on social media that the army had seized power.

"The head of state has not been detained; no institution of the country has been threatened," Simpore said. "For now, we don’t know their motives or what they are demanding. We are trying to get in contact with them," he said, adding that calm had returned to some of the barracks.

Governments in West and Central Africa are on high alert for coups after successful putsches over the past 18 months in Mali and Guinea. The military also took over in Chad last year after President Idriss Deby died on the battlefield.

Burkinabe authorities arrested a dozen soldiers earlier this month on suspicion of conspiring against the government.

The arrests followed a shake-up within the army's leadership in December, which some analysts saw as an effort by President Roch Kabore to shore up his support within the military.

Additional demonstrations were planned for Saturday, but the government banned them and the police intervened to disperse the hundreds of people who tried to assemble in Ouagadougou.

The government has suspended mobile internet service on several occasions, and the tense situation in November led the U.N. special envoy to West Africa to warn against any military takeover.

Among the inmates at the Sangoule Lamizana camp prison is General Gilbert Diendere, who was a top ally of Burkina Faso's former president, Blaise Compaore. Compaore was overthrown in a 2014 uprising.

Diendere led a failed coup attempt the following year against the transitional government. He was sentenced in 2019 to 20 years in prison. He is also currently on trial in connection with the killing of Compaore's predecessor, Thomas Sankara, during a coup in 1987.