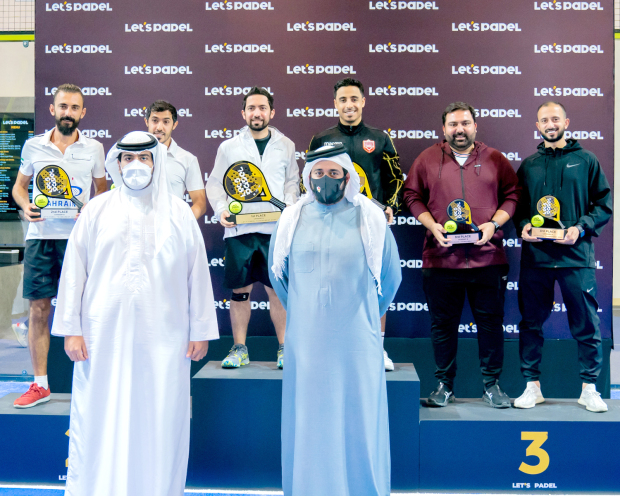 The players were slotted into three categories, based on ability and experience, with a fourth category for mixed-doubles and a fifth just for women.

Misas and Divel competed in category A, reserved for players with professional experience and top-level ability.

Bahrainis Badar Matar and Tariq Abdulhameed triumphed in category B, the second rung which saw players that had reached a certain level of proficiency in the sport but were not quite top-flight competitors yet.

Widely considered to be the fastest-growing sport in the world, padel is a racket sport that combines the elements of both tennis and squash to create a fast-paced, physically taxing experience. Played in an enclosed court that is roughly 25 per cent smaller than a normal tennis court, padel uses the same scoring system as tennis and is currently played by more than 20 million players in 30 countries across five continents.

Supreme Council for Youth and Sport first deputy chairman, General Sports Authority (GSA) chairman and Bahrain Olympic Committee president Shaikh Khalid bin Hamad Al Khalifa, who awarded the trophies to the winning pairs, expressed his delight at the level of participation in the tournament which featured a broad pool of male and female players from around the world.

“This kind of championship supports our efforts to increase sports tourism in Bahrain,” he said.

He noted that a large number of the kingdom’s population had taken to the sport, with many individuals from both genders playing the game.

“As a result, we have a strong foundation through which we can compose teams and national teams to represent Bahrain at continental and international levels,” he added.