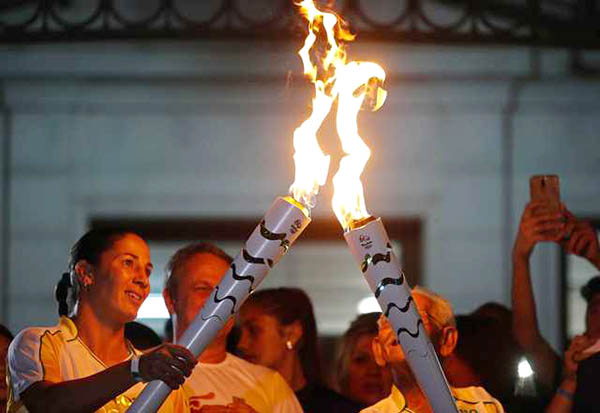 The violent clashes late on Wednesday in Angra dos Reis, a coastal resort south of Rio, cast a shadow over final preparations for South America’s first Olympics, which starts on Friday.

In another worry for organisers, Rio metro employees threatened on Thursday to go on strike on the eve of the Games if they do not get a 9.83 per cent salary raise, raising the possibility of transport chaos for some 500,000 tourists expected to attend.

Rio de Janeiro state security secretary Jose Mariano Beltrame said that policing during the torch relay - which will have visited more than 300 Brazilian cities by the time of the opening ceremony in Rio’s Maracana stadium - needs improving.

“There has never been a problem,” he was quoted as saying by G1 news site. “Yesterday there was one. This needs to be reevaluated and we will be paying more attention to this question.”

“Extinguishing the torch is a crime,” he warned.

The crowd, protesting a lack of public transport and the late payment of salaries by the nearly bankrupt Rio state, attacked the procession in Angra dos Reis before being driven off by police using tear gas and rubber bullets.

In footage of the clashes shared online and on Globo television, someone can be heard shouting triumphantly: “The torch has been put out!” as the torch bearer, carrying an unlit torch, is hustled into the safety of a bus.

The Rio organising committee said in a statement that the torch relay “had to be temporarily interrupted.”

However, “out of consideration to the inhabitants of the city who wanted to attend the relay,” it was restarted at the next stage “after an evaluation by the security team.”

Organisers portray the torch’s nationwide journey as a chance to ignite public enthusiasm for the Olympics.

But repeated security incidents have turned the torch into a symbol of organisational glitches and social discontent.

Highlight reels of torch mishaps have gone viral online, including several attempts to extinguish the flame, runners falling over, a police motorbike crashing into the parade, a man attempting to seize the torch, and political protests.