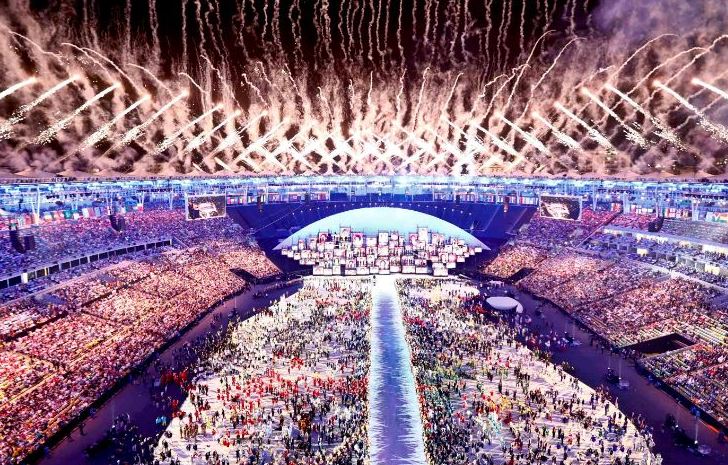 Rio De Janeiro: Brazil unfurled a vast canvas celebrating its rainforest and the creative energy of its wildly diverse population to the tune of samba, bossa nova and funk in welcoming the world on Friday to the Olympic Games in Rio de Janeiro.

In a country of great economic inequality, the opening ceremony celebrated the culture of the favelas, the slums that hang vertiginously above the renowned beaches of Rio and ring the site of Friday's spectacle, the famed Maracana stadium.

There was no glossing over history either: from the arrival of the Portuguese and their conquest of the indigenous populations to the use of African slave labor for 400 years. The clash of cultures, as the ceremony showed, is what makes Brazil the complex mosaic that it is.

Home to the Amazon, the world's largest forest, Brazil used the ceremony to call on the 3 billion people watching the opening of the world's premiere sporting event to take care of the planet, plant seeds and reconquer the verdant land that Europeans found here five centuries ago.

Unlike the opening ceremonies in Beijing in 2008 and London 2012, a financially constrained Brazil had little choice but to put on a more "analogue" show, with minimal high-tech and a heavy dependence on the vast talent of Brazil and its Carnival party traditions.

The show drew homegrown stars, like supermodel Gisele Bundchen, who walked across the sands to the sound of bossa nova hit "Girl from Ipanema" and Paulinho da Viola, a samba songwriter who sang the national anthem with a string orchestra. Everyone performed for free.

The joyful opening of South America's first Games contrasted with months of turmoil and chaos, not only in the organization of the Olympics but across Brazil as it endures its worst economic recession in decades and a deep political crisis.

Interim President Michel Temer presided over the opening of the Games inside Maracana with dozens of heads of state. He took over from suspended President Dilma Rousseff, who is facing an impeachment trial and tweeted that she was "sad to not be at the party."

The $12 billion price tag to organize the Games has aggrieved many in the nation of 200 million and in Rio, where few can see the benefits of the spectacle or even afford to attend the Games.

Police used stun grenades against a few hundred anti-Olympic protesters near the stadium, armored tanks lined the streets, and the 50,000 attendees faced two-hour-long lines as Brazil staged its most intense security operation ever.

PEOPLE ON THE PERIPHERY

The creative minds behind the opening ceremony were determined to put on a show that would not offend a country in dire economic straits but would showcase the famously upbeat nature of Brazilians.

It started with the beginning of life itself in Brazil, and the population that formed in the vast forests and built their communal huts, the ocas.

The Portuguese bobbed to shore in boats, the African slaves rolled in on wheels and together they plowed through the forests and planted the seeds of modern Brazil.

The mega-cities of Brazil formed in a dizzying video display as acrobats jumped from roof to roof of emerging buildings and then on to the steep favela that served as the front stage for the ceremony.

"This is a conquest. The people on the periphery are having an influence, it's a recognition of their art," said Eduardo Alves, director of social watchdog Observatorio de Favelas.

Before the entry of hundreds of the 11,000 athletes that will be competing in the Games, the playful rhythms of the ceremony gave way to a sober message about climate change and rampant deforestation of the Amazon.

Each athlete will be asked to plant seeds that will eventually grow into trees and be planted in the Athletes Forest in Rio in a few years.

Still to come, Brazilians waited to see who had been selected to light the Olympic cauldron after soccer great Pele declined to take part because of health problems. 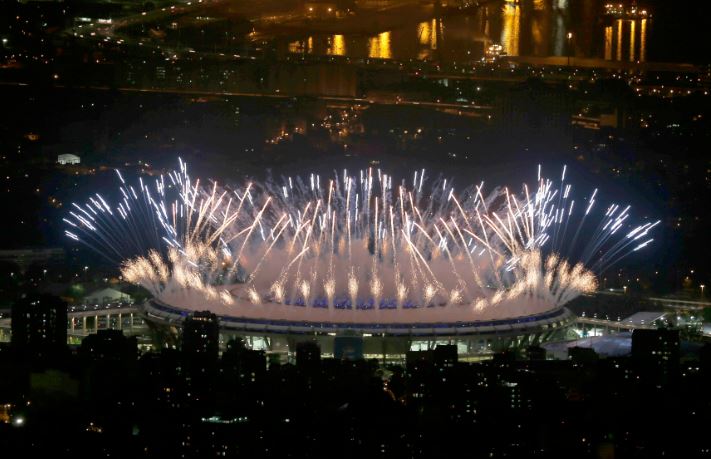 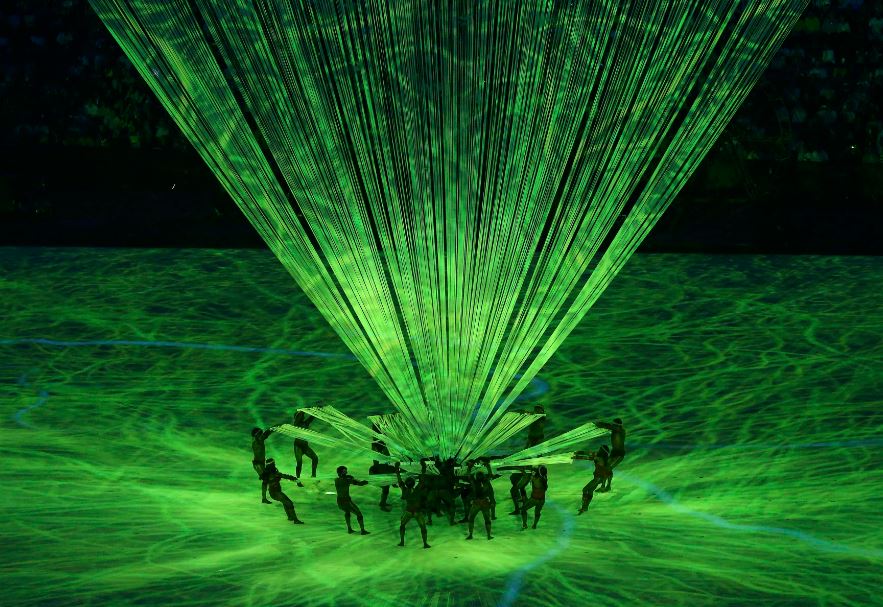 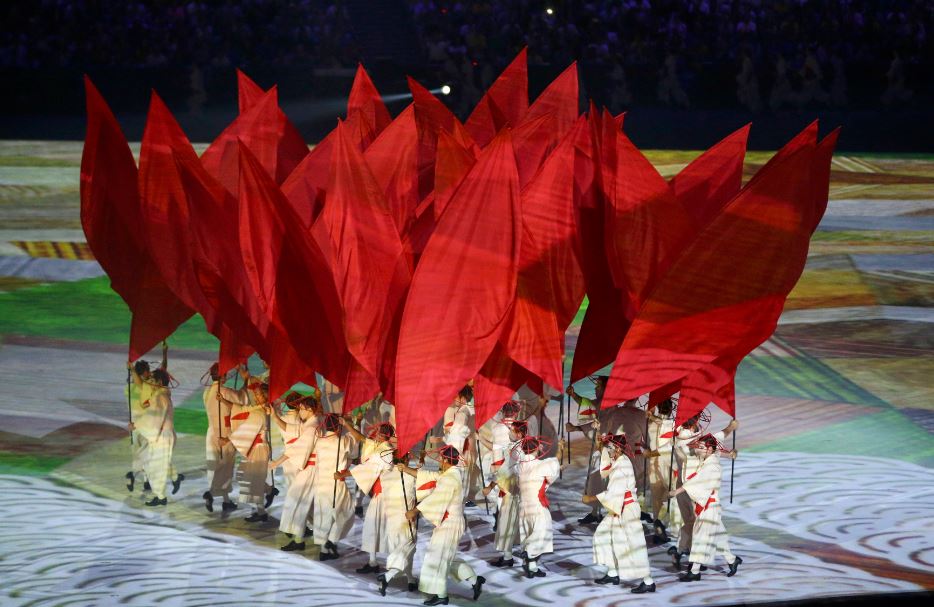 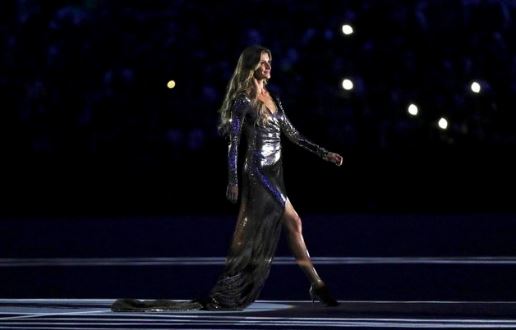 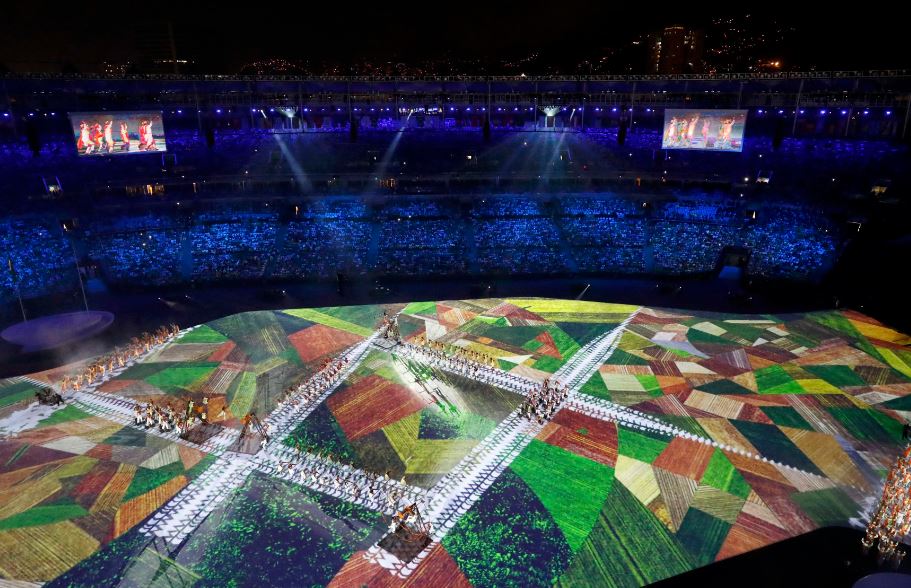 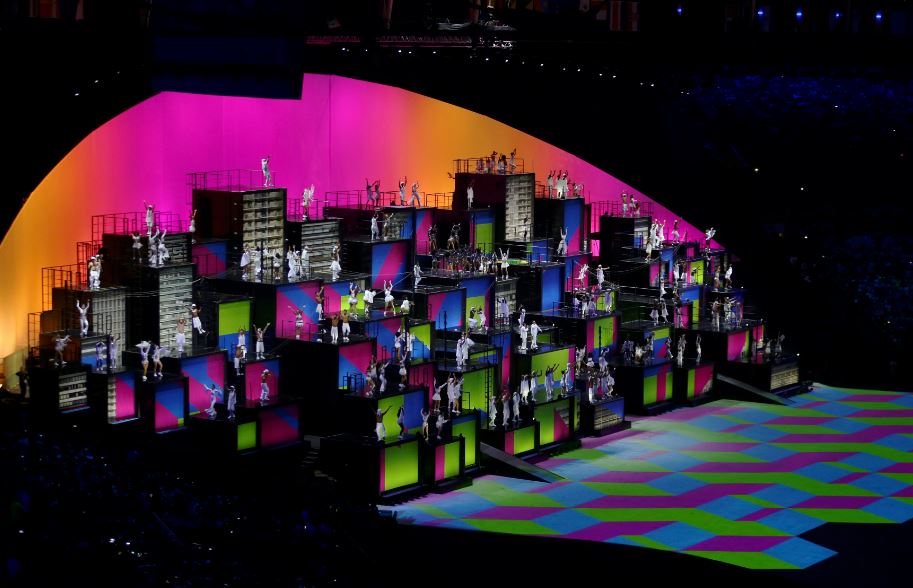 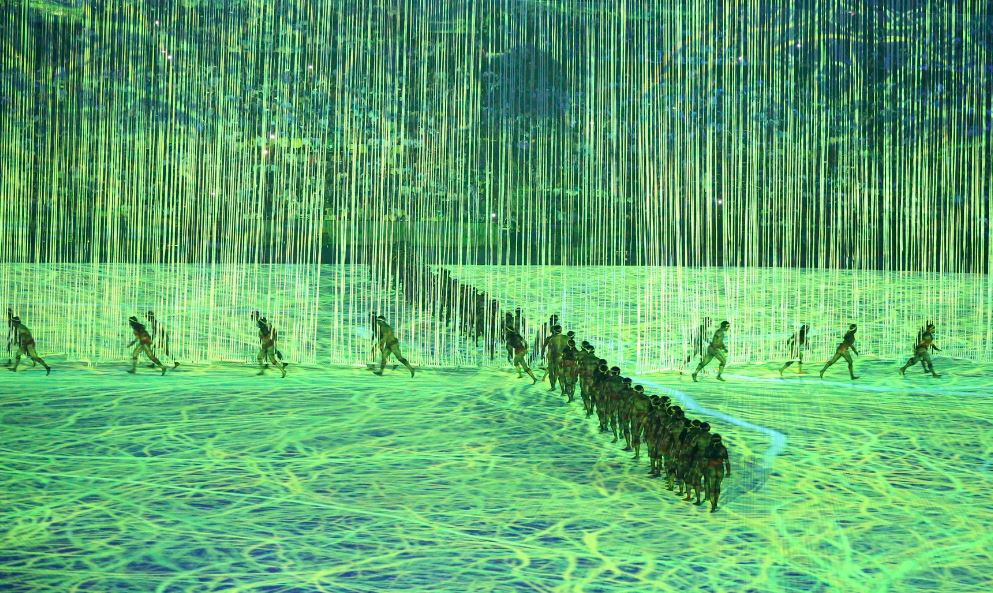 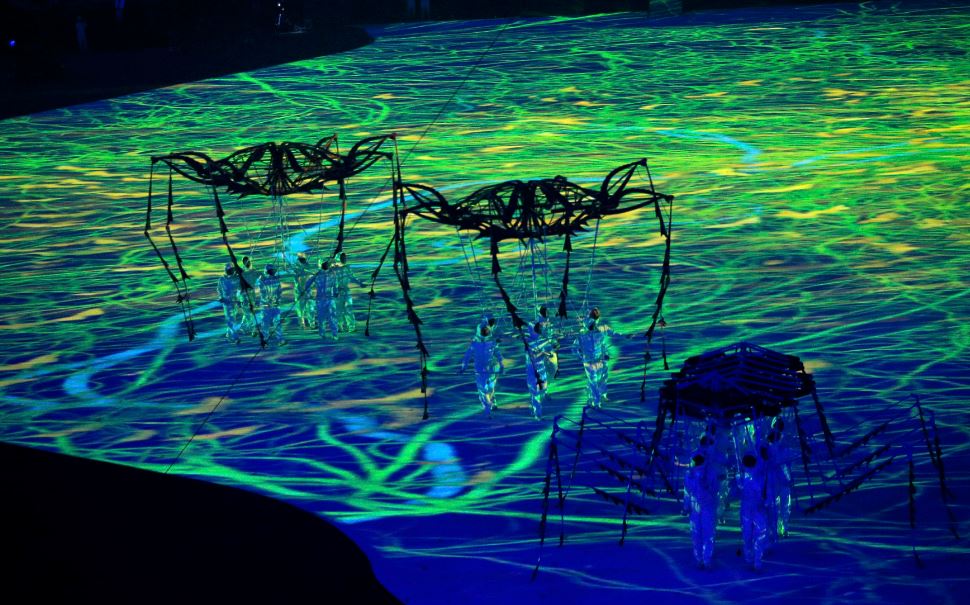 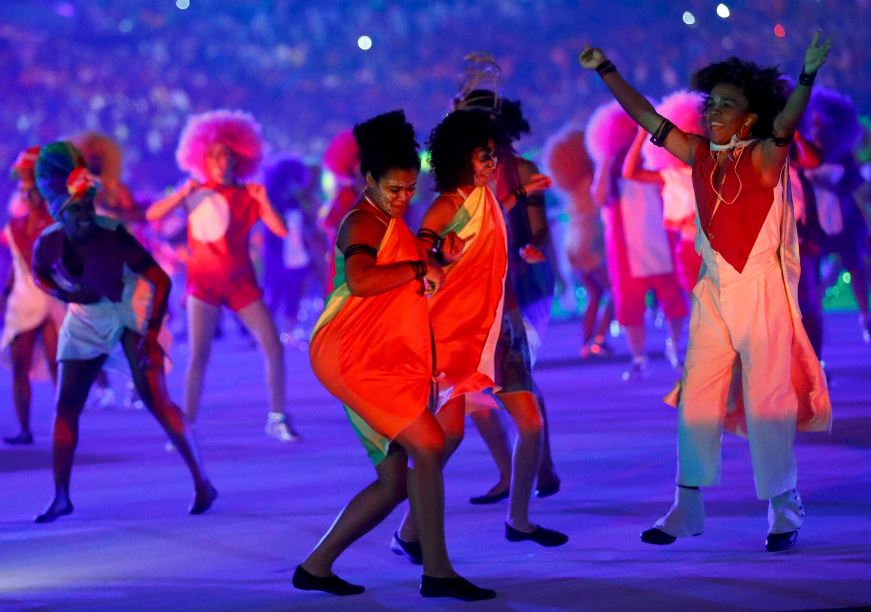 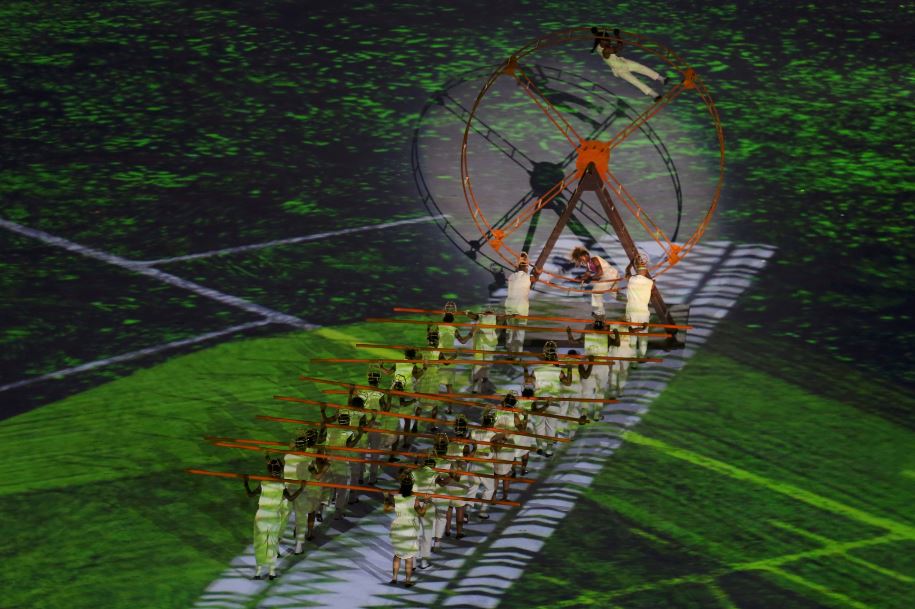 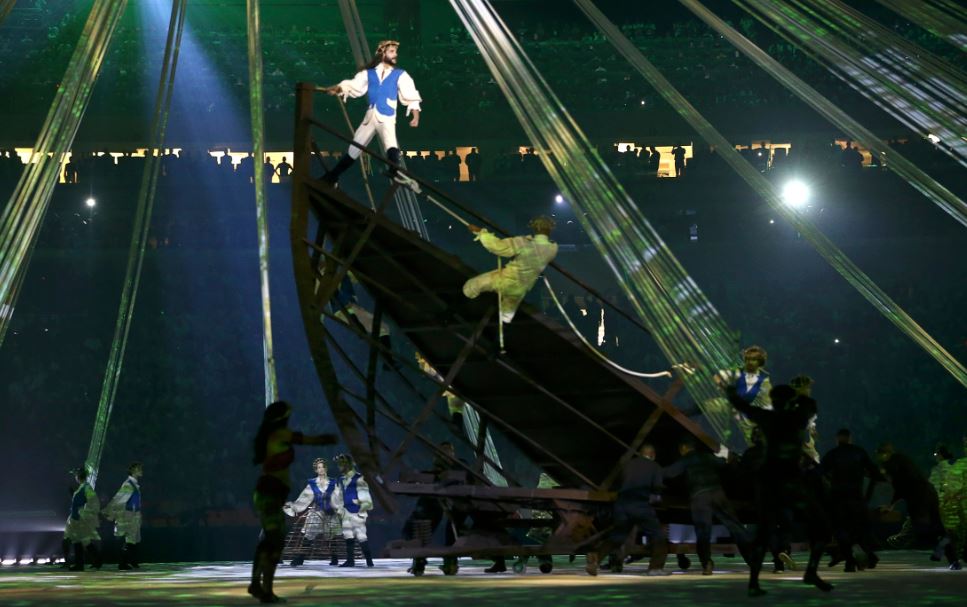 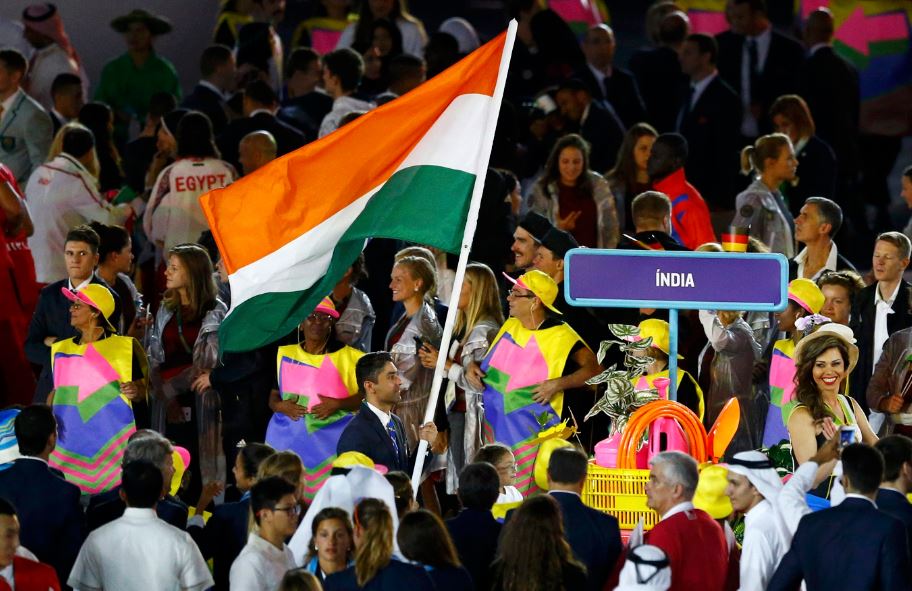 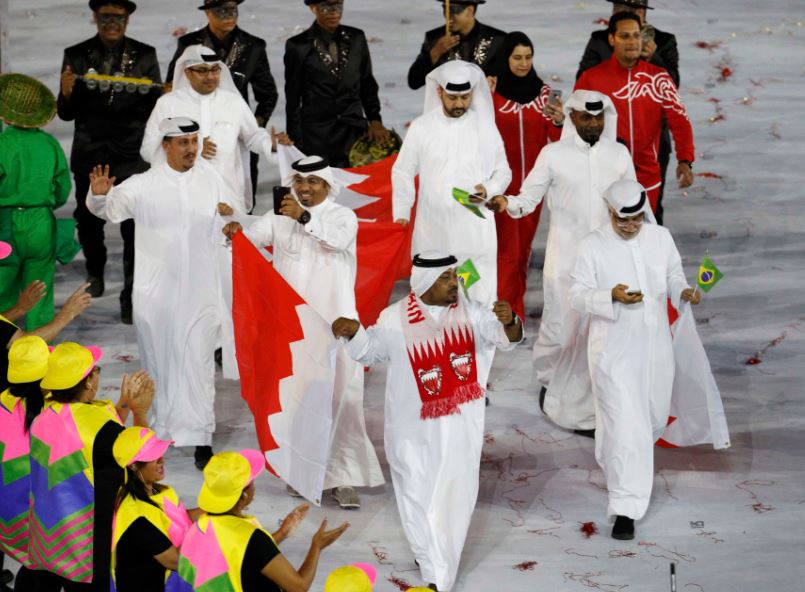 The Bahrain contingent take part in the athletes' parade at the opening ceremony. (Reuters Photo) 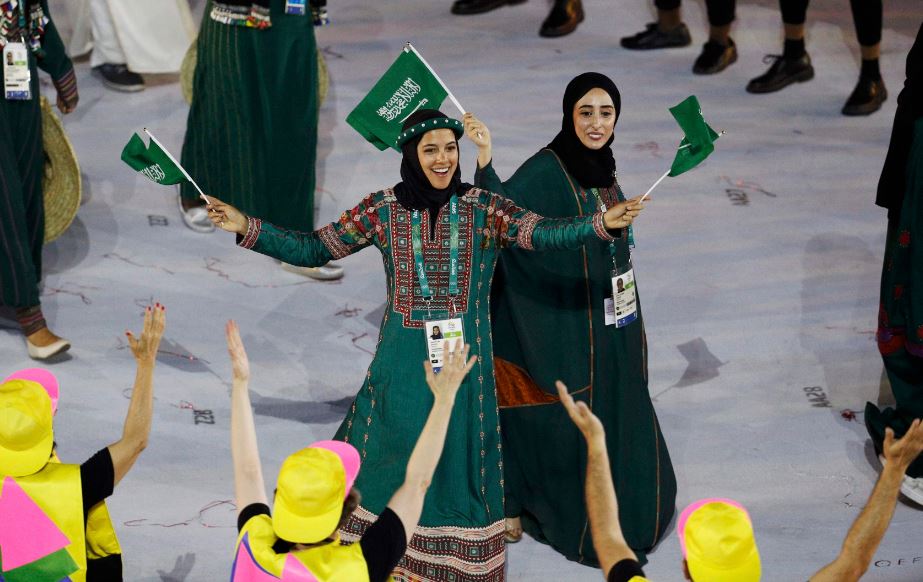 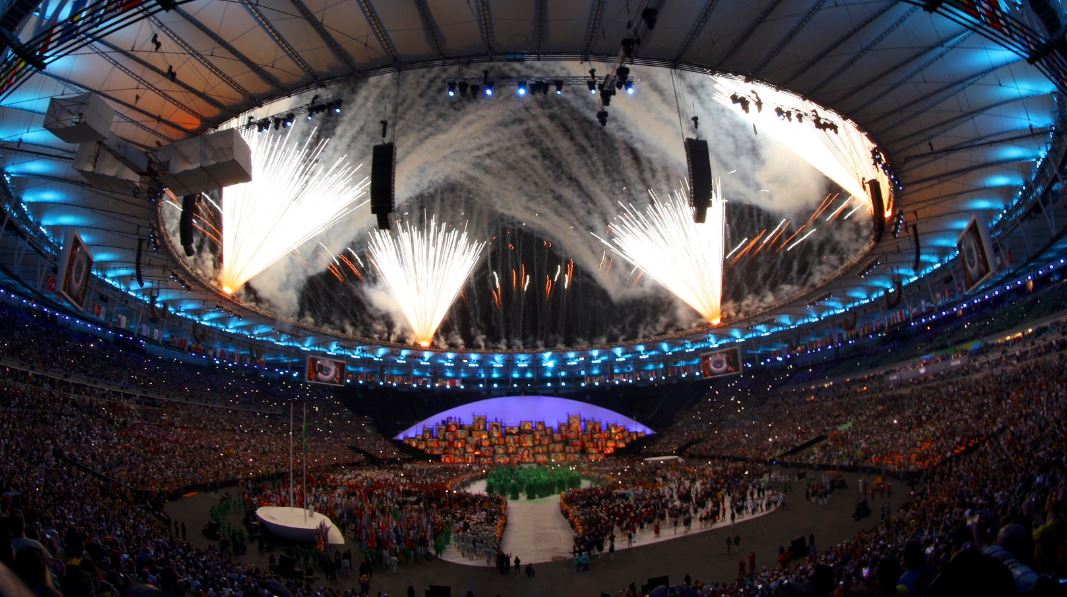