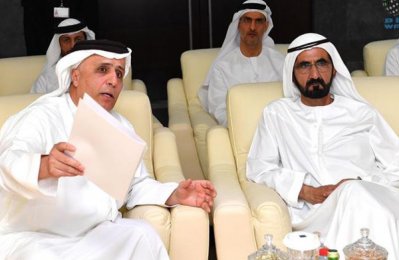 HH Sheikh Mohammed (right) is given details of the projects.

Several infrastructure projects being implemented by the Dubai's Road Transport Authority (RTA) as part of its 2030 Strategy won approval from His Highness Sheikh Mohammed bin Rashid Al Maktoum, Vice President and Prime Minister and Ruler of Dubai, during his visit to RTA's head office yesterday.

While visiting the RTA's head-office in Umm Al Ramol district, Dubai, he hailed the RTA team's efforts, including those of engineers, technicians and managers, led by Eng Mattar Mohammed Al Tayer, chairman of the board and executive director of RTA.

"Each achievement scored in Dubai is an achievement for our beloved country and its successive generations," Sheikh Mohammed said.

The RTA work team demonstrated before Sheikh Mohammed the traffic and transport plan until 2030, which included a set of projects, of which some are being implemented.

He approved the projects and urged for high quality and timely delivery, especially the projects related with Expo 2020 Dubai, in Jebel Ali.

Sheikh Mohammed was briefed on designs and components of a number of vital projects, including Shindagha Crossing, which was designed to become a special landmark in Dubai.

He was also briefed on the details of the five-year plan of the RTA for 2017-2021 to pave internal roads in 16 residential districts in Dubai city. The plan also includes planting and beautifying the roads to protect the environment in line with the strategy to achieve the green economy in the city. Trees will be planted in a number of areas, covering more than 600 hectares, in the first quarter of next year.

The work team also presented plans for entrances and exits of the Jewel Creek project, which includes the construction of a pedestrian bridge on Baniyas Road and the intersection between Jebel Ali Lehbab and Qudra streets as well as a flyover bridge for bicycles.

Sheikh Mohammed was also briefed on project designs of shipping docks on the Dubai Water Canal and Commercial Bay, inspired by local marine life. He chose one of the designs that matches local architecture.

The RTA also plans an expansion of the Burj Khalifa station of the Dubai Metro in light of huge population growth in the Burj area and increase in the number of metro users, having reached about 6,000 passengers per hour during January. The capacity of the station is expected to be enhanced to approximately 180,000 passengers daily after the expansion.

Sheikh Mohammed praised the setting up of a 120-m-long pedestrian bridge connecting Al Sufouh and Western streets in the JBR area. The project will be completed by early 2017.

He was also briefed about the traffic and transport plan until 2030. Among the schemes proposed is the traffic solution project to enhance the traffic flow in the vicinity of Expo 2020 Dubai. The project includes the implementation of 36 extra bridges. It will be completed in five stages by November 2019.

Al Tayer said that the project will help increase the capacity of the Airport Road with about 5,000 additional vehicles per hour, and also contribute to raising the level of traffic safety and reducing time on the street, starting from Sheikh Mohamed bin Zayed Road until Casablanca street, from 30 minutes to just five minutes.