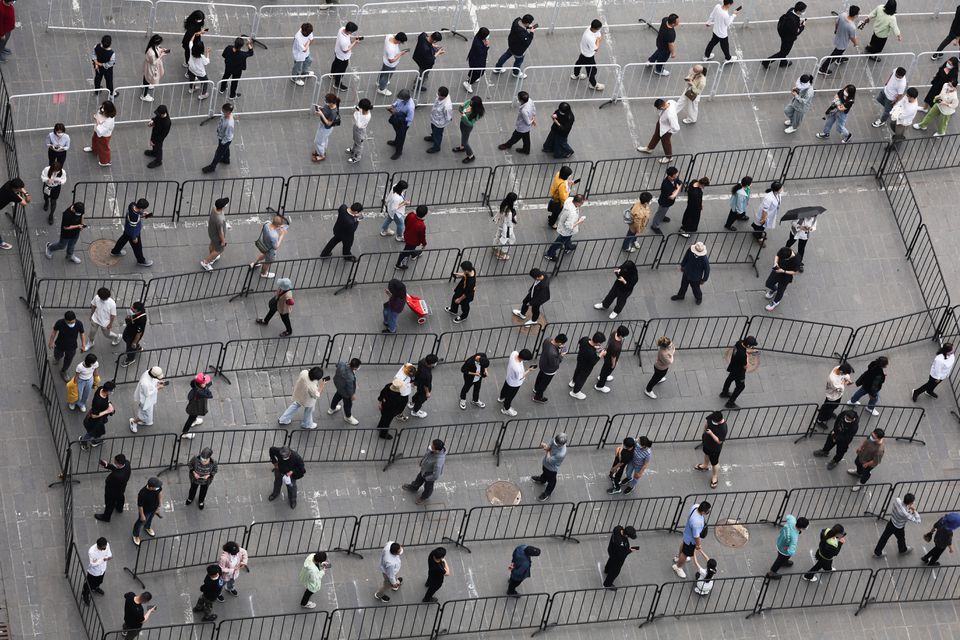 Three-quarters of Beijing's 22 million people began lining up for Covid-19 tests on Tuesday as authorities in the Chinese capital raced to stamp out an outbreak and avert the kind of city-wide lockdown that has shrouded Shanghai for a month.

Beijing residents also began stocking up on food and supplies on worries of any sudden localised lockdowns, as frustration with tough curbs continues to mount in Shanghai, the Chinese financial and commercial hub that is home to 25 million people.

Videos on social media show people leaning out of Shanghai windows to beat pots and pans in anger, or play "Do you hear the people sing?", a protest anthem from the musical "Les Miserables", on flutes and trumpets.

Trying to avoid a similar fate by acting early, Beijing began mass tests of 3.5 million people in its most populous district Chaoyang on Monday. By the end of the day, authorities listed 10 other districts and one economic development zone for mandatory tests this week, covering a total of 20 million people and ordering 16 million for tests on Tuesday.

The orders come days after dozens of infections were found. Shanghai waited for about a month and more than 1,000 cases before launching city-wide testing in early April.

Liu Wentao, a Beijing cook, said he was concerned at how fast Covid was spreading, but was confident the capital could handle it.

"The virus controls are stronger than in other places, I don't think it will be like Shanghai," he said on his way to get tested.

Beijing recorded 33 new Covid cases for April 25, up from 19 the day before with no deaths reported so far in the outbreak. The total case load is miniscule compared with hundreds of thousands in Shanghai.

Shanghai reported 52 new Covid deaths on Tuesday, up from 51 the day before. That takes the official death toll to 190, all reported from April 17 onwards, although many residents have said relatives or friends died after catching Covid as early as March, casting doubt over the statistics.

In the capital, schools, stores and offices remained open, but the iconic Lama temple said it would be closed to tourists from Wednesday, while Beijing's National theatre would close for the rest of the month.

Officials have urged residents to refrain from leaving the capital and avoid gatherings for the upcoming April 30-May 4 Labour Day holidays.

In Shanghai, strict enforcement of measures continued, but plans for a city-wide PCR testing exercise were somewhat derailed by the weather forecast, with hail expected later.

While authorities say they have relaxed some curbs, most in Shanghai are still either confined to their homes or cannot leave their residential compounds. Even those who can go out have few places to go, with shops and most other venues closed.

In areas where leaving home is allowed, residents were asked to take rapid antigen tests on their own, rather than line up for PCR testing in the rain. In the rest of Shanghai, daily PCR tests remained mandatory.

The prolonged lockdown has fuelled frustration over lost wages, family separation and quarantine conditions, as well as access to medical care and food, with residents struggling to dispose of trash and make basic errands.

The Shanghai government did not immediately comment on signs of growing discontent.

Asymptomatic and symptomatic new cases dropped slightly to 15,319 and 1,661, respectively, while cases outside quarantined areas were flat at 217. Other Chinese cities that have been under lockdown began easing restrictions once such cases hit zero.

The fallout from any lockdown in Beijing is expected to be much smaller than that on economic powerhouse Shanghai, however.

"If there is a lockdown in Beijing, I think it has less impact on businesses because most of these positions can be done from home," Beijing-based Joerg Wuttke, president of the European Union Chamber of Commerce, told Reuters.