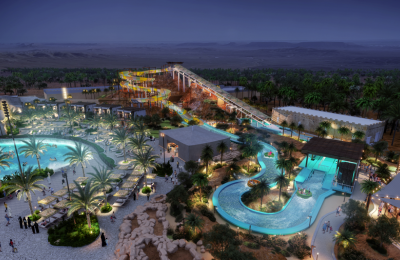 Dewan Architects + Engineers, a leading architectural and engineering design company, said it has been awarded the lead design consultancy contract for Saudi Arabia’s first water theme park coming up within Qiddiya, the capital of entertainment, sports and the arts.
The newly announced Qiddiya Water Theme Park is one of the flagship projects in the futuristic destination, Qiddiya.
Dewan said it has successfully delivered the design and is now supervising the physical construction of this landmark development.
It is working with a large team of renowned water theme park experts, ride vendors, engineering and infrastructure professionals.
The water park will be at the heart of the attractions at Qiddiya, close to Saudi Arabia’s capital, Riyadh. The expansive project will cover 337,948 square metres of land and include 22 rides, nine of which will be world-firsts.
The Qiddiya Water Theme Park will have nine distinct districts inspired by native animals and habitat, including Camel Rock, the Den, the Herding Grounds and Arabian Peak. Qiddiya will be 137,948 square metres bigger than any such water park in the world.
The disruptive destination is recognised on the world stage as the home to the most innovative and immersive experiences offering sports and wellness, nature and environment, parks and attractions, motion and mobility and arts and culture, making Qiddiya the capital of entertainment, sports and the arts, not just in the Kingdom of Saudi Arabia, but the world.
The water park is part of the overall giga-project and is budgeted to cost in the region of $750 million. Dewan will use Smart technology to ensure that its operation aligns with its sustainability efforts.
The architects are using highly advanced environmental systems that will allow them to use 75 per cent less water than traditional practices. They have also considered efficient technologies that will reduce evaporation concerns. The park will boast state-of-the-art facilities to host world water tournaments.