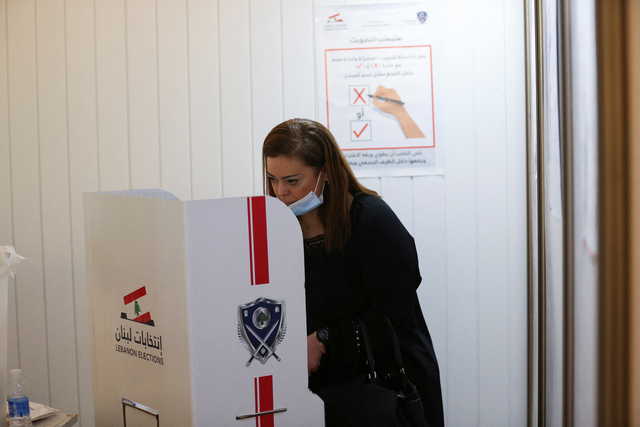 A Lebanese expat casts her vote for Lebanon's parliamentary election at the Lebanese Embassy in Riyadh, Saudi Arabia May 6, 2022. Reuters Photo

Thousands of Lebanese living in Arab and Muslim countries began voting yesterday in the crisis-hit country’s parliamentary elections, nine days before the vote is scheduled to be held at home. About 31,000 Lebanese citizens in 10 countries have registered to vote in yesterday’s first phase. Nearly 195,000 Lebanese citizens are scheduled to vote tomorrow in other countries around the world including the US, Canada, Australia, Russia, European Union member states, as well as several African nations.

It is the first time that Lebanon’s diaspora is allowed to take part in the vote, as they were previously prohibited from voting abroad. Lebanese living in Lebanon will cast their ballots on May 15.

The vote this year for the 128-member legislature is the first since the country’s economic meltdown began in October 2019, triggering nationwide protests against Lebanon’s political class blamed for decades of corruption and mismanagement. It is also the first vote since the August 4, 2020 massive blast at Beirut’s port that killed more than 200, injured thousands and caused wide damage in the capital.