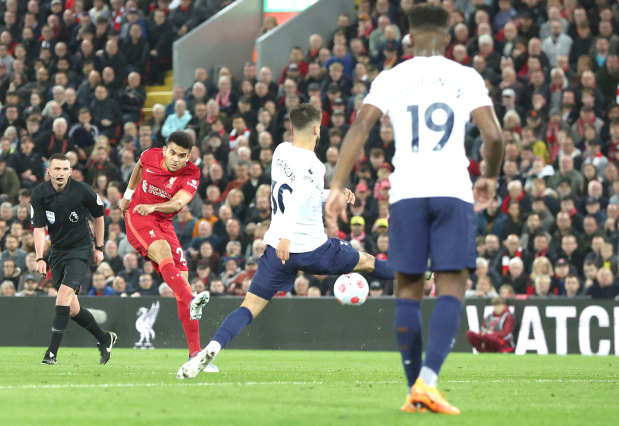 Diaz scores the equaliser for Liverpool

LONDON: Liverpool suffered a huge blow in their hopes of winning the Premier League title as they could only draw 1-1 at home to Tottenham Hotspur on a tense night at Anfield last night.

Luis Diaz cancelled out Son Heung-min’s opener to preserve Liverpool’s 14-month unbeaten run at home in the Premier League and send them top of the table on goal difference.

But the mood at the end was subdued as reigning champions Manchester City can move three points clear in a gripping title race with three games to play if they win their game in hand at home to Newcastle United today.

It was only the second time in 15 league matches that Liverpool have not taken all three points – the other occasion being a draw against City last month – and the consequences could be severe for Juergen Klopp’s men.

With the margin of error tiny, City now look strong favourites to retain their crown.

“It is incredibly difficult to play against an opponent with world-class players and a world-class manager when they have had a week to prepare and we play every three days,” Klopp, whose side reached the Champions League final on Tuesday, said.

“The dressing room is not flying, come on, but there are other games to play. We just have to keep going.”

It could have been even worse for Liverpool had Pierre-Emile Hojbjerg converted a glorious chance deep in stoppage time instead of bizarrely opting to head the ball across to Harry Kane rather than at a gaping goal.

In the end a draw was a disappointing outcome for both clubs in their respective ambitions, Liverpool’s to reclaim the title and Tottenham’s to finish in the top four.

Liverpool and Manchester City both have 83 points while Tottenham remain in fifth spot with 62 points, one behind fourth-placed Arsenal who host Leeds United today.

“It is a big point, but gutted we didn’t make it at the end,” Son, who is now only two goals behind Mohamed Salah in the race for the Premier League Golden Boot, said.

Virgil van Dijk came closest to scoring before the interval when he headed a corner against the crossbar while Diaz forced Lloris into a fine low save.

Tottenham, who have emerged unbeaten from their games against Liverpool and City this season, were always a menace on the counter-attack and they took the lead in clinical style.

Kane did superbly to control a high ball and then played in Sessegnon on the right channel and his cross was tapped in by Son for his 20th goal of the season.

Tottenham looked capable of holding on and moving into fourth spot until Diaz cut in from the left in the 74th minute and his shot took a wicked deflection to beat Hugo Lloris.

Liverpool laid siege to Tottenham’s goal after that but the late goal they so often find refused to arrive.