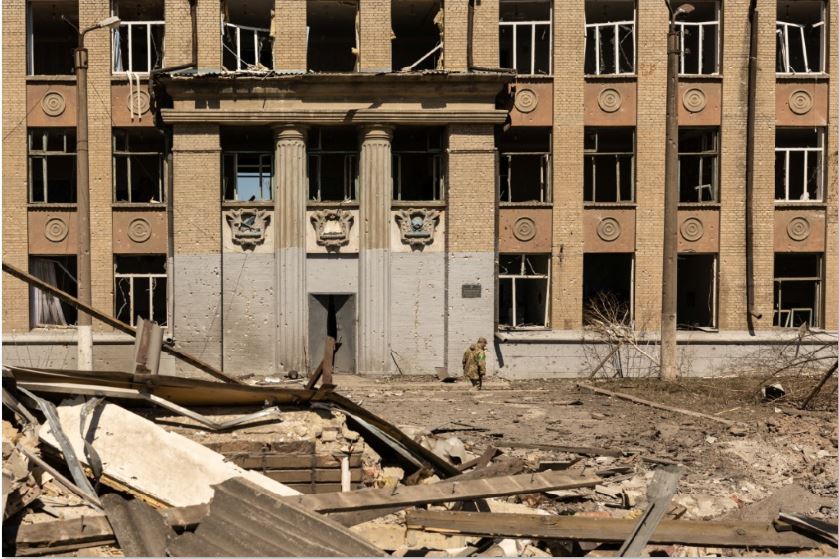 A Ukrainian soldier walks in front of a school that was bombed amid Russia's invasion in Ukraine, in Kostyantynivka, in the Donetsk region, Ukraine, May 8, 2022. REUTERS/Jorge Silva

ZAPORIZHZHIA: As many as 60 people are feared to have been killed when a bomb struck a village school in eastern Ukraine, the regional governor said yesterday while Russian forces continued shelling the last holdout of Ukrainian resistance in the ruined southeastern port of Mariupol.

Luhansk region governor Serhiy Gaidai said the school in Bilohorivka, where about 90 people were sheltering, was hit on Saturday by a Russian bomb, setting it ablaze.

“Thirty people were evacuated from the rubble, seven of whom were injured. Sixty people were likely to have died,” Gaidai wrote on the Telegram messaging app, adding that two bodies had been found.

Reuters could not immediately verify his account. There was no response from Moscow to the report.

Ukraine and its Western allies have accused Russian forces of targeting civilians in the war, something that Moscow denies.

In Mariupol, the deputy commander of the Azov regiment holed up in the sprawling Azovstal steel plant pleaded with the international community to help evacuate wounded soldiers.

“We will continue to fight as long as we are alive to repel the Russian occupiers,” Captain Sviatoslav Palamar told an online news conference.

As the fighting, now in its third month, raged on, leaders of the Group of Seven industrial nations vowed yesterday to deepen Russia’s economic isolation and “elevate” a campaign against Kremlin-linked elites.