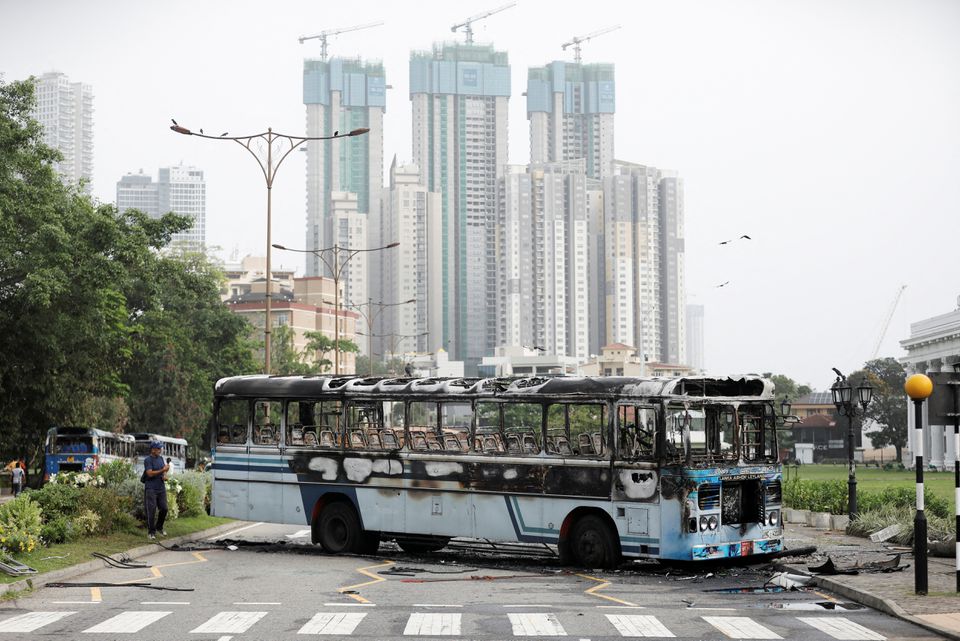 A damaged bus of Sri Lanka's ruling party supporters is blocking a main road after it was set on fire during a clash of pro and anti-government demonstrators near the Prime Minister's official residence, amid the country's economic crisis, in Colombo, Sri Lanka, May 10, 2022. REUTERS/Dinuka Liyanawatte

COLOMBO: Protesters and a key trade group in Sri Lanka called for a new government to take control of the crisis-hit country yesterday while the president asked for calm following clashes that claimed eight lives and prompted his brother to quit as prime minister.

Sri Lanka has been suffering its worst economic crisis in history, with a severe shortage of foreign exchange stalling essential imports, including drugs and fuel. For months, its tottering economy has been largely supported by India, which has provided assistance of more than $3.5 billion as the country began much-delayed talks with the International Monetary Fund (IMF) for a rescue package and also sought help from China.

But the public’s patience ran out on Monday after ruling party supporters attacked an anti-government protest camp in the commercial capital Colombo, triggering a bout of clashes in which eight people died and more than 200 were injured. Protesters defied the curfew to attack government figures, setting ablaze homes, shops and businesses belonging to ruling party legislators and provincial politicians.