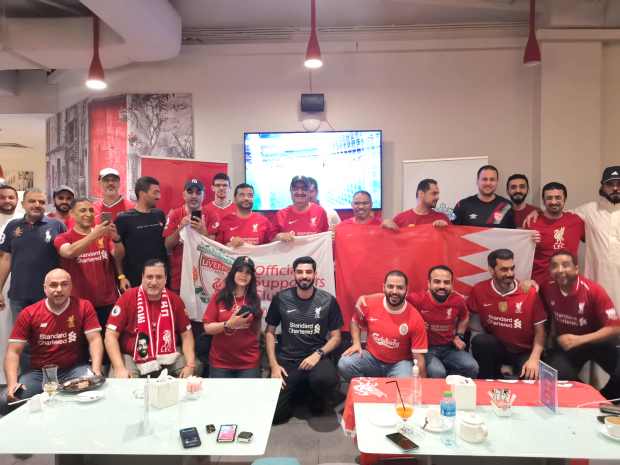 Members of Bahrain’s official Liverpool fan club celebrated late into the night as their team kept its dream of a quadruple title haul in the season alive by beating Chelsea 6-5 on penalties in the FA Cup final at Wembley Stadium.

“I am extremely happy,” Official Liverpool Supporters Club (OLSC), Bahrain, chairman Dr Dheya Abdulaziz Taufeeqi told the GDN. “About 40 of us had gathered at a café in Seef and, while the tension was unbearable during the penalties, our team won and we are over the moon.”

Liverpool native Thomas Harrington, who moved to the kingdom three years ago and works for a renewable energy company, told the GDN he had been so nervous during the penalties that he nearly chewed off his nails.

“Gosh, I have almost no fingernails left,” he exclaimed.

Harrington isn’t a member of the official supporters club and had opted to go to a restaurant near his home in Amwaj to watch the game.

“The match wasn’t easy to watch as a Liverpool fan,” he said. “But, I bumped into about 10 Liverpool supporters so we tried to bounce some positive energy to each other.”

Meanwhile, in an Adliya sports lounge, where about 25 members of the Chelsea FC Official Supporters Club, Bahrain, had gathered to cheer their team on, the mood was decidedly downbeat.

“Obviously, this is a very disappointing outcome,” a contender for the Chelsea fan club’s presidency this year, Fawaz Al Shaikh, told the GDN. “It was a long, long game that could have gone in either direction. Still, somehow, most of us have already accepted the bitter fact of losing two finals, to the same team, in one season!”

Liverpool won their first title of the season in February by defeating Chelsea, also on penalties, in the final of the Carabao Cup. They are due to meet Real Madrid in the final of the UEFA Champions League on May 28 and could still pull off a miracle championship win in the English Premier League (EPL), even though Manchester City, whom Liverpool trail by three points with two matches left to play for both teams, are clear favourites.

“I never miss any of these gatherings,” Dr Taufeeqi said. “I, and many of our members, always get together to support our team. They’ve performed outstandingly all season but it is tough for the players – they’ve reached three finals and are within touching distance of the EPL trophy too. They must be very tired.”

Harrington also pointed to the toll, the strain of constantly travelling and playing three times a week would be exacting on the Liverpool players’ physical and mental health.

“They’re travelling all over the place, with hardly any rest in between games,” he explained. “And they’re playing high-intensity games, with everything to play for in each match. But they’re an exceptional bunch and that’s why they keep on winning.”

The Liverpool fan club, Dr Taufeeqi said, had already made arrangements for the Champions League final.

“We’re going to get together at a five-star hotel and we’ll have a lot more people than we had tonight,” he said. “Because we’ll be joined by other Liverpool supporters who are not members of our club. And, at the end of the season, we’ll hold another gathering to celebrate Liverpool’s achievements this past year.”

“They’ve competed well against the top teams in Europe,” he said. “It’s been a tough time for them this year, with the uncertainty over the ownership and all that. But I honestly believe we will overcome this next season. For now, yes, Liverpool deserve the trophy, but we were just a penalty away from winning the cup.”