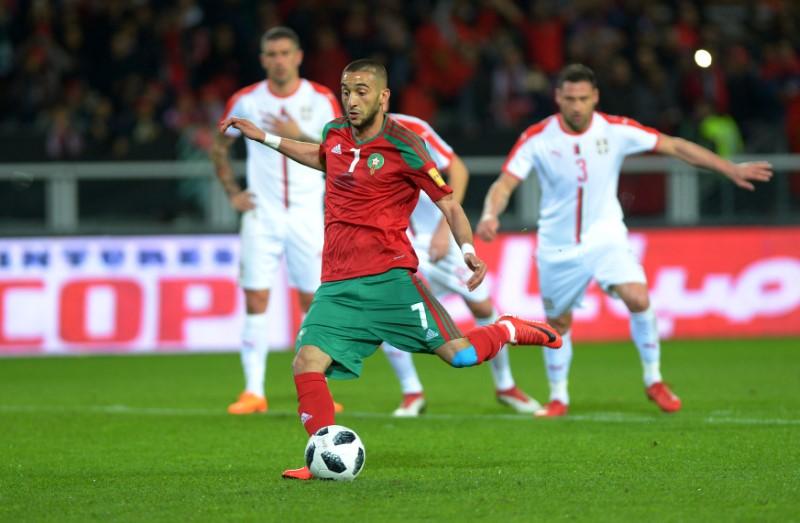 Morocco’s squad for next month’s friendly with fellow World Cup-bound side the United States, plus two Africa Cup of Nations qualifiers, is eagerly awaited to see if forward Hakim Ziyech makes a comeback and coach Vahid Halilhodzic keep his job.

Chelsea's Ziyech, who is Morocco's biggest star, fell out with the coach last year and did not play for the country in any World Cup qualifiers or at January’s Cup of Nations finals.

Ziyech, 29, and 24-year-old fellow Dutch-born international Noussair Mazraoui, who plays for Ajaz Amsterdam, were left out of the squad after Halilhodzic accused them of faking injury to avoid playing for Morocco last June.

The pair missed the six World Cup qualifiers Morocco played between September and November but the fact that the team won all six games tempered fans’ outrage at their omission when the coach did not pick them for the Cup of Nations in Cameroon.

But after much-fancied Morocco departed in tepid fashion in the quarter-finals, the 69-year-old Halilhodzic faced a storm of criticism with the absence of Ziyech being the main complaint.

Even though Morocco then eased through the March World Cup playoffs, beating Democratic Republic of Congo 5-2 on aggregate to book a place at this year's finals in Qatar, Halilhodzic continued to come under pressure to call up Ziyech and Mazraoui.

Halilhodzic has achieved the extraordinary feat of twice before being fired after qualifying a team for the World Cup and could face the ignominy a third time if he refuses to budge.

The Ivory Coast sacked him after a poor Cup of Nations tournament in Angola in 2010, just months before the World Cup, while in 2018 it was poor relations with Japan’s players that saw him removed before the tournament in Russia.

Halilhodzic was last week in Amsterdam for a reconciliation with Mazraoui and is expected to try to clear the air with Ziyech, who said in January he would never again play for Morocco.

Ziyech also had a bust-up with previous Morocco coach Herve Renard but, after talks between the two, returned to play at the World Cup in Russia.

Morocco face the U.S. in Cincinnati on June 2 and then host South Africa in their opening Cup of Nations qualifier on June 9 in Rabat. They are scheduled to play an away qualifier against Liberia but that has been moved to Casablanca on June 13.