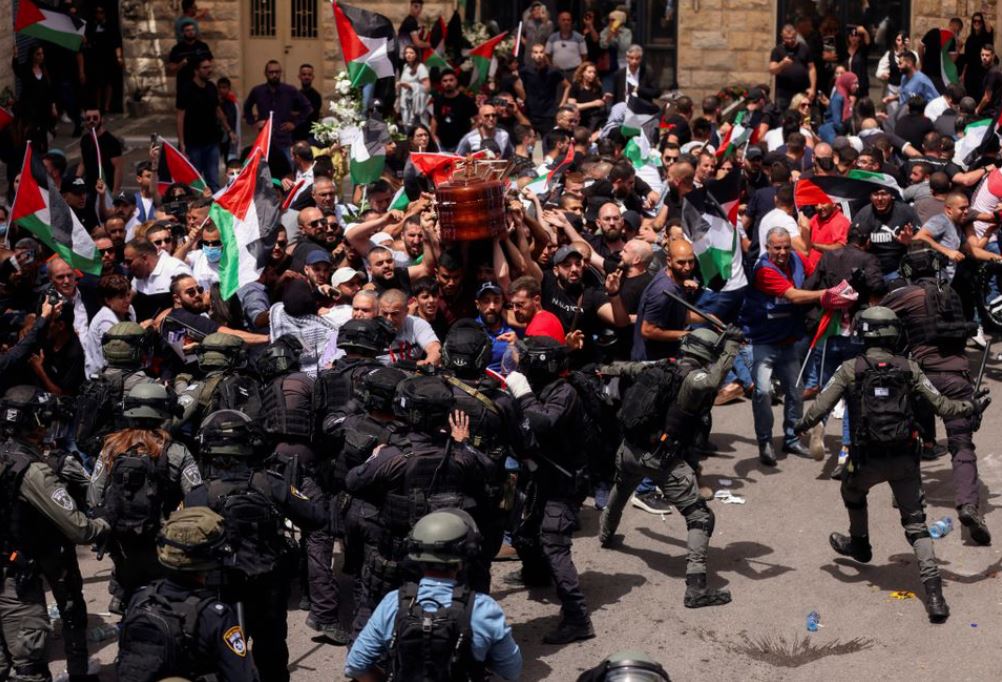 Family and friends carry the coffin of journalist Shireen Abu Akleh, who was killed during an Israeli raid in Jenin in the occupied West Bank, as clashes erupted with Israeli security forces, during her funeral in Jerusalem, May 13, 2022. Reuters Photo

JERUSALEM- Israel police have arrested one of the Palestinian pallbearers beaten by officers at the funeral of slain journalist Shireen Abu Akleh, the detained man's lawyer said on Wednesday.

A police spokesperson confirmed the arrest of Amro Abu Khdair but said it was not connected to Friday's funeral. He declined to give the reason for the man's arrest.

Images of baton-wielding Israeli officers beating the pallbearers, who at one point nearly dropped Abu Akleh's coffin, drew widespread international condemnation and stoked anger over the killing of the reporter during an Israeli military raid in the occupied West Bank on May 11.

Abu Khdair's lawyer, Khaldoon Nijm, said his client was arrested on Monday but that the charges were not revealed to him and were based on information from Israel's domestic security service. He said Abu Khdair later told him he was questioned about the funeral.

A police spokesperson said any connection made to the funeral would amount to a "cheap conspiracy". Abu Khdair's custody had been extended until Sunday, police and the lawyer said.

A second pallbearer, who asked not to be identified, told Reuters he had been questioned by police though not arrested.

Israel's Internal Security Minister Omer Barlev said on Saturday he and the police commissioner had appointed a panel to carry out a "comprehensive investigation of what happened during the funeral in order to learn lessons from the event".

Separately Israel is conducting a probe into Abu Akleh's death. The Palestinians are also investigating her killing.

The Palestinians accuse Israel forces of assassinating her. Israel has denied targeting her, saying she may have been shot accidentally by a soldier or by a Palestinian gunman as they exchanged fire in the West Bank city of Jenin.