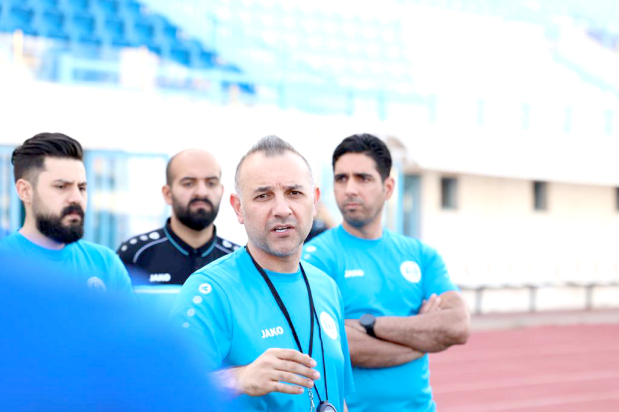 Riffa will clash with table-toppers Dhofar, from Oman, tonight at the Kuwait Sports Club Stadium in a high-stakes AFC Cup Group B game that the Bahraini team need to win in order to retain any chance of staying in contention for a semi-final slot.

The 2021-22 Nasser Bin Hamad Premier League champions suffered a blow at the start of their campaign on Wednesday when they lost their first game 3-2 to Kuwaiti opponents, Al Arabi, despite leading 2-1 at half-time. As a result, they are in third position on the four-team table, above Palestinian side Shabab Al Khalil, who lost 3-0 to Dhofar on the same night

But their coach is confident that his team can bounce back from that defeat and make a strong statement in tonight’s face off.

“The last game was unlucky for us,” Ali Ashoor told the GDN last night by phone from Kuwait. “Small details made all the difference and we lost three points. But we believe in ourselves, we believe that these kinds of matches need mental toughness. We must show our personality in this game. We must show everybody that we can bounce back.”

The squad had spent the last two days analysing the previous game and tried to rectify the mistakes they saw in their last training session, Ashoor added.

Meanwhile, Dhofar, who have won the Oman Professional League – the country’s premier football competition – 11 times are not taking Riffa lightly.

“It will be a difficult match because Riffa are a strong team and they will be looking to make a comeback after losing against Al Arabi,” Dhofar forward Omar Al Malki said. He celebrated his AFC Cup debut on Wednesday by scoring the second of his team’s three goals against Shabab Al Khalil.

Al Malki would be one of the Dhofar players that Riffa would be wary of, Ashoor said.

But Riffa would be more than a match for such a good team, Ashoor said.

“We are Riffa club!” he declared! “We are the Bahrain premier league champions for the last two seasons! We only lost one game out of the 36 games we played in those two seasons. Yes, it’ll be a tough match but we believe we can win!”

The team’s prospects would be bolstered by the return, from suspension, of Mohamed Al Romaihi, the star Bahrain national forward, who became a national hero when he scored the lone goal against Saudi Arabia in the 2019 Arabian Gulf Cup final that won his country that tournament for the very first time.

“We hope he will make a difference for us,” Ashoor said.

The AFC Cup, an annual, continental club football competition organised by the Asian Football Confederation (AFC), consists of 38 teams spread across 10 groups, with each group being hosted at centralized venues. The winners of each group, and the best runner-up team, qualify for the zonal semi-finals.

This is the sixth time Riffa are playing in the tournament, with their debut appearance occurring in 2010 when they reached the semi-finals.

Dhofar are also playing in the AFC Cup for the sixth time. In five previous appearances, starting with the first in 2004, they have never made it past the group stage.