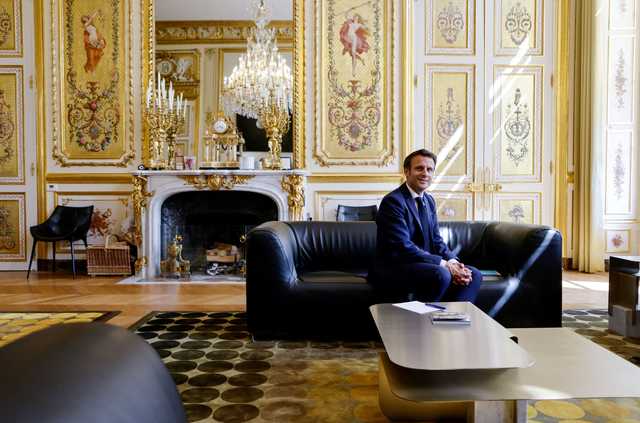 French President Emmanuel Macron poses in his office during a meeting with Moldovan President Maia Sandu at the Elysee Palace in Paris, France May 19, 2022. Ludovic Marin/Pool via Reuters

PARIS: Emmanuel Macron retained his finance and interior ministers while appointing only the second woman to head France’s foreign ministry, as the president reshuffled his cabinet ahead of parliamentary elections next month.

After his re-election in April, when the far right came its closest yet to taking the presidency, centrist Macron pledged to govern France “in a different way” from a first term during which his focus on economic reforms left much of the electorate discontented.

With first Covid-19 and now surging inflation reversing some of the hard-fought gains earned by those reforms, he now needs to persuade voters he is responding to their frustrations in time for June’s parliamentary ballot.

The three nominations would suggest the president has not opted for a wholesale overhaul of his leadership – though with women playing a more prominent role.

Retaining their respective finance and interior ministry portfolios, Bruno Le Maire and Gerald Darmanin, will be joined at the cabinet’s top table by Catherine Colonna as foreign minister, the presidency announced.

All three come from a centre-right background.

Agnes Pannier-Runacher was promoted from junior minister for industry to energy minister. She will be tasked with reviving the country’s ailing nuclear sector and accelerating the rollout of more renewable energy, while shaping France’s response to the gas crisis and voter anger over energy prices.

Macron – busy with crisis diplomacy abroad and tough political bargaining ahead of the parliamentary vote at home – has taken nearly a month to appoint a new cabinet.

On Monday, he named Elisabeth Borne as prime minister. The left-leaning career technocrat served in his earlier governments, most recently as labour minister, when she stared down trade unions over unemployment benefit reform.

“Bringing down the cost of living will be the government’s first priority,” Borne said.

France heads into June’s parliamentary elections as Europe grapples with a war on its eastern flank that has stunted a post-pandemic economic recovery and exacerbated a sharp acceleration in consumer price rises across the euro zone.

If Macron wins the legislature, his government’s priorities will also include action to combat climate change and pushing back the retirement age – a task likely to fall to new Labour Minister Olivier Dussopt.

Although polls show Macron should be able to form a ruling majority, he is under pressure from an alliance of left-wing parties and re-energised far-right leader Marine Le Pen.

Should Macron and his allies lose the parliamentary election, he will have to name a new prime minister from the ruling majority who will then be tasked with naming a new cabinet.