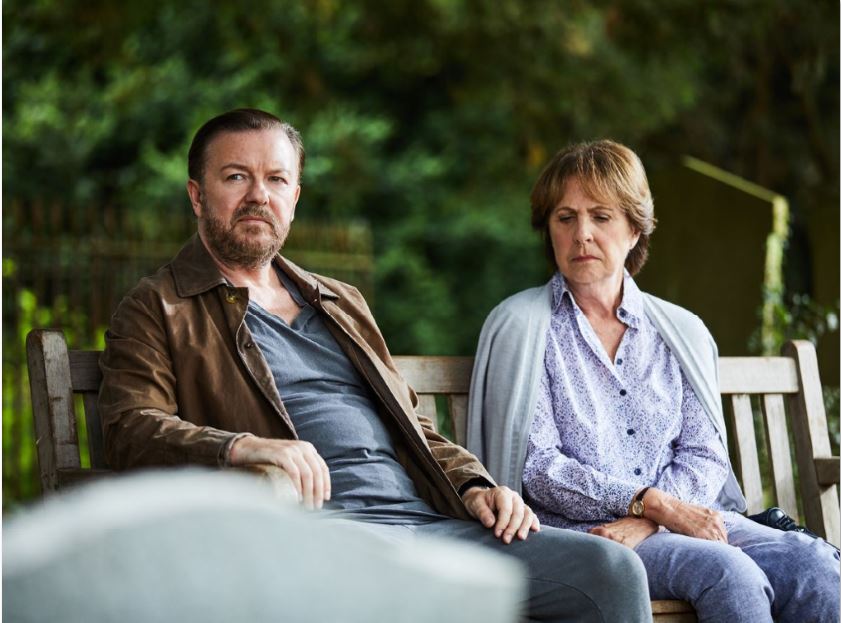 A bench scene from the hit series After Life

Benches inspired by a Ricky Gervais TV show about loss has been installed in parks across the world.

One of the copies of the bench seen in highly-acclaimed After Life, was placed in Reading, the celebrity’s home town. Others have been placed across Europe, the US and Australia donated by families in memory of loved ones.

After Life’s main heartbroken character Tony, played by Gervais, is often seen sitting on a bench in a churchyard where his young wife is buried. A woman played by Penelope Wilton, whose husband is also buried in the cemetery, often sits beside him.

The bench is the setting of their conversations across all three series, as Tony deals with his grief. Critics have described it as the ‘most powerful stage’.

“It’s not easy to find a positive in grief but as the bench says, ‘Hope is Everything’ and we all have to cling on to hope, hope that things will get better and, in time, they will,” Gerri Excell, Reading Council’s bereavement service support officer, added.

“We hope our newest bench will be a place where people can sit, think, talk, listen and heal.”

Gervais, also renowned as a stand-up comedian, writer and awards show presenter, has been staggered by the global response to the series. “Still can’t get over this,” he tweeted yesterday, “thank you. And, thanks for all your lovely tweets still flooding in after all this time.”