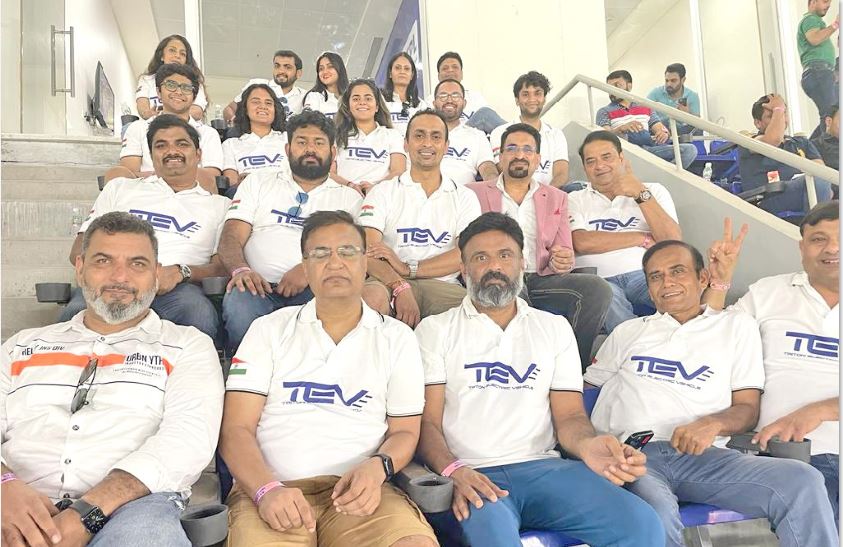 Mansoor, second from right, second row from bottom, with Titans supporters at the stadium

“What an incredible experience,” Mansoor told the GDN by phone from Ahmedabad. “There are no words to describe it. More than 130,000 people were in the stadium to watch this game. This was an absolutely massive occasion.”

The Titans, one of two new teams introduced into the mix (Lucknow Super Giants are the other team) for this year’s IPL, raising the total number of participating teams to 10, had dominated the league stage, winning 10 out of their 14 games to top the table and cantered into the final after defeating Rajasthan Royals in the first qualifier.

The Royals, then, defeated Royal Challengers Bangalore (RCB) in the Eliminator to set up what promised to be a mouth-watering clash in the final.

Unfortunately, the game turned out to be one-sided after the Royals limped to a below-par total of 130/9 off their 20 overs, which the Titans overhauled with ease for the loss of only three wickets, with 11 balls to spare.

Bahrain cricket has a strong connection to the Titans because the kingdom’s national cricket team head coach, former India international Aashish Kapoor, is also the spin bowling coach of the IPL franchise.

In addition, star Bahrain all-rounder, Sathaiya Veerapathiran, was recruited by the Titans as a net bowler just before the start of the 2022 edition and has been with the squad for the duration of the tournament.

“This was a proud moment for us, for the BCF,” Mansoor said. “Aashish is an integral part of our set-up – he is the one propelling the game onwards and upwards in Bahrain – and Sathaiya is one of our bright young talents. It is fantastic to see them both having contributed to this amazing win by the Titans.”