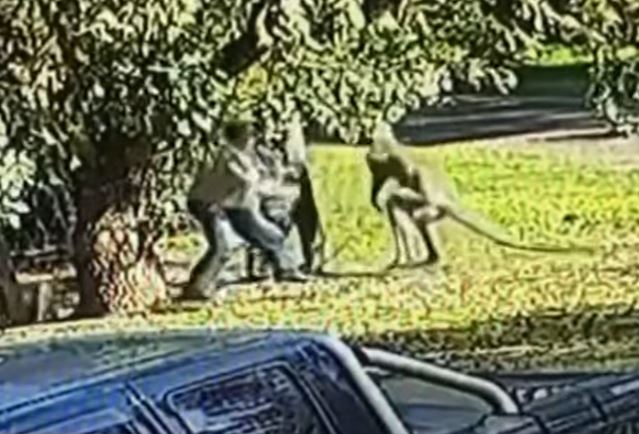 An Australian man fought an enraged kangaroo for six minutes to save his dogs.

Cliff Des was at his New South Wales home last week when “a six-foot buck roo in a bad mood” tried to grab his dogs out of the front yard.

He attempted to shoo the wild animal away but failed, leading to his battle with the marsupial.

“It just put its claws up, stood on its back feet and started chasing me,” Des told Today on Tuesday.

“I started running into my yard and next thing you know I’ve slipped over and it’s jumped on my back.”

CCTV footage from the incident shows Des trying to defend himself with a stick, and then tackling the animal to the ground.

The fight left him with a few cuts and bites.

Despite his frightening experience, Des still holds an affection for kangaroos.

“They’re a beautiful creature, they’re an Australian icon … what I can take from the whole scenario is just don’t go near them,” he said.