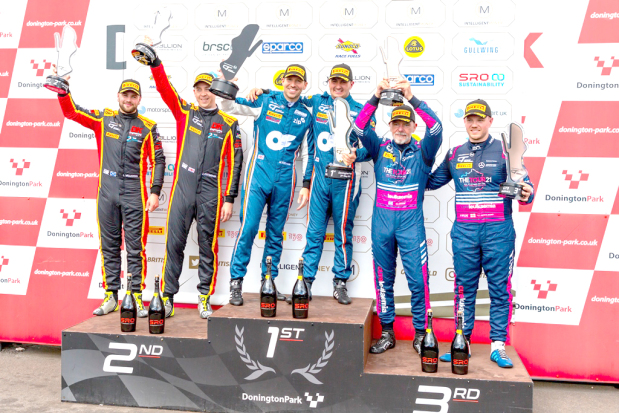 2 Seas drivers on the podium

The fourth round of the Intelligent Money British GT Championship saw 2 Seas Motorsport score a season-best finish and a debut championship podium for James Cottingham and Lewis Williamson.

The #4 pairing capitalised on their best-ever qualifying result to remain in contention throughout the duration of the three-hour event at the first visit of the year to Donington Park, finally delivering the result that the pace in the early races this year have promised.

The pace of the bold yellow and red DK Engineering-branded Mercedes-AMG GT3 was, once again, extremely strong in each of the early sessions. James delivered an impressive opening qualifying run to set benchmark times for the rest of the field to beat, improving consistently throughout the session.

Lewis then took the wheel for the Pro qualifying run, and the combined laptimes secured the team the best result of the season to-date, starting from the front-row.

A committed start by James saw him take the lead around the outside of turn 1 as the 3-hour race got underway, and he set off building a gap to the chasing field. He managed this gap over the opening stint, defending position and successfully negotiating the slower GT4 traffic before a Safety Car intervention brought the lead pack into the pitlane and a shuffle to the order. Lewis took the restart after several laps under caution but the unlucky timing of the Safety Car undid all of the hard work from the opening stint. With the order still settling, he was still firmly part of the lead pack, immediately looking to make up positions and gain the advantage.

At middle-distance, still on target for a podium, Lewis retook the lead as the pitstop cycle worked its way through. The strategy call gave an opportunity to run in clean air and keep the fight to close the cars which had stopped early. Just before two-thirds distance, and James back in the car, the #4 was consistently among the quickest cars on track, running in P2. The gap to the leader ebbed and flowed as the strategies played out.

A final mandatory pitstop in the closing stages saw Lewis back in for the final sprint to the line, although traffic would prevent the gap from being reduced any further. At the line, after 180-minutes of hard battling, James and Lewis brought home the first silverware of their 2022 campaign to finish on the second step of the Donington Park podium.

“A great effort by the whole team, and great for James and Lewis to score their first podium of the season. We have had the pace over each of the races, but we have had our fair share of bad luck, so it is great to bounce back and to be back on the podium, where we belong. We still have some work to do, but the pace is clearly there with both drivers, and we are in a good place overall. We are improving with each race, taking lessons from very session, and hopefully we can carry on this momentum over the second half of the season,” said team co-owner Isa Al Khalifa.

The championship returns to the sprint race format at Snetterton for rounds 5 and 6, on June 25 and 26. 2 Seas Motorsport will be back in action with James and Lewis in the #4 Mercedes-AMG GT3, and Flick Haigh and Jonny Adam will return to the team in the #75.